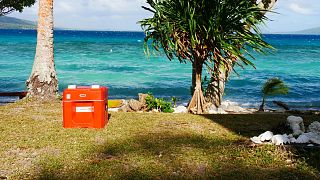 Planes, submarines, velcro and cat’s eyes - nature is an endless source of inspiration for the world’s inventors. The field of energy might seem too complicated for such analogies, but for one electrical engineer, it was a school of fish that inspired his original solar energy design.

They look more like red Lego blocks - and stack up like them too - but ‘Power-Blox’ work in the same way as a shoal, co-founder Alessandro Medici tells Euronews Green. Just as fish can grow, split and re-group, the blocks’ batteries combine to create an ‘energy swarm’.

What we are talking about are ‘energy cubes’, with batteries powered by portable solar panels. One of these solar boxes can meet most of a home’s electrical needs, and is easily plugged into another box to generate more energy for a community.

This is a more flexible system than mini-grids, and the technology has huge potential in some of the world’s poorest and most remote places. The Swiss company has distributed some 2,000 power blocks in around 20 countries since 2018, and is now on the verge of releasing an even more powerful device.

It’s all with a key UN sustainable development goal in mind: providing affordable, clean energy for all by 2030. 10 per cent of people, mostly in rural areas of sub-Saharan Africa, still lack access to electricity, according to the World Bank.

Simplifying that challenge is a driving force for Medici, who is also the firm’s chief technology officer. “We need a kind of internet of energy,” he says, recalling the early, centralised days of computers, before the web connected us. “We have to integrate energy systems, we have to make them individually, we have to make the possibility to combine them and scale them up, [so they still work] even if there is a breakdown in part of the grid.”

It can run off wind or hydro power too, making it perfectly adaptable to different climates around the world.

The beauty of Power-Blox technology is that it can easily expand as a community’s energy needs grow, just by plugging in more blocks and solar units. In fact it can run off wind or hydro power too, making it perfectly adaptable to different climates around the world.

Revolutionising energy from Mozambique to Vanuatu

Partnering with the United Nations Development Programme (UNDP) and other aid organisations, Power-Blox has brought its energy storage solution to dozens of communities so far.

In one recently electrified Mozambique village, people have used the energy to start selling items from cold drinks to fridges and offer customers mobile charging stations.

It’s not only power, it’s also power that animates people to do something because they can start various kinds of business.

“The whole village somehow developed, you even could see that from space,” says Medici. “It’s the same on the ground; it’s not only power, it’s also power that animates people to do something because they can start various kinds of business.”

Power-Blox has also electrified the off-grid island of Lelepa in the Republic of Vanuatu, and last year equipped entrepreneurs in an Ugandan refugee settlement.

“We often use it in disaster relief situations where there is an earthquake or tsunami,” adds Medici. “The Swiss government flies our power blocks to the place, even though they don’t know how much [energy] is needed, in the beginning.”

The PBX-200 supplies energy within minutes.

Have they considered sending them to Ukraine? “Absolutely,” says Medici, “We have already told our partners [also numbering USAID and Médecins Sans Frontières] - if you have any questions regarding power needs in Ukraine, please approach us, we can find the right solution.”

Amid the devastating heatwave in India - which has led to a surge in electricity demand blackouts - Power-Blox is looking to help speed up the transition to sustainable transport.

What’s next for Power-Blox and the off-grid energy movement?

The biggest check on energy swarms’ potential is, it seems, a lack of funding. Solar home systems are more limited in scope, according to Medici, but attract the bulk of investment.

Power-Blox’s partner and competitors “all face the same problem: the funding really is not there for electrification.”

But although the tech company’s continued focus is on sub-Saharan Africa - growing interest from Western countries is providing a welcome boost. Power-Blox has electrified 150 mountain huts in Switzerland, and enabled Swiss IT companies to make the switch from analogue to digital communications.

These more power-hungry scenarios have spurred on the development of PBX-400, the “bigger brother” of the original device, which is now in its final stages.

Swarms of fish and towers of lego are Power-Blox’ enduring inspirations. But Medici traces the origin back to 2008, when he was staying on a ranch in Kenya owned by Jochen Zeitz, the former CEO of Puma. Asked to help run the eco resort on solar and wind, Medici says “I realised during this project that sustainable technology is very complex, it was really difficult to implement. You have to be an engineer, and know everything about batteries, about solar modules, inverters and a thousand other things.”

“How can we make that simpler?” is a question he has been asking himself ever since.

As he looks to make the design ever-more sustainable too, the engineer is encouraged by new developments with re-used and saltwater batteries. The current lithium-iron phosphate batteries could easily be swapped out for a better model, Medici says.

“We always hope that better chemistry is coming up.”