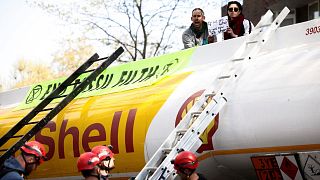 Police officers try to remove Etienne Stott, former Olympian, and an activist from Extinction Rebellion who have occupied a Shell oil tanker during a protest.   -   Copyright  REUTERS/Henry Nicholls
By Rosie Frost  •  Updated: 05/05/2022

Oil giant Shell's profits have soared to a record €8.6 billion in the first quarter of 2022 - almost three times what it made during the same time period last year.

The company says the increase in earnings came from higher energy prices, a strong performance from its trading arm as well as lower expenses and taxes.

The corporation isn’t alone in reporting a big rise in profits in the first quarter of 2022.

In just the first three months of this year, BP’s profits more than doubled to €5.9 billion. BP’s report shows that this money has effectively been cancelled out by its decision to cut investments in Russian oil following the invasion of Ukraine.

But these colossal earnings are the company’s highest reported quarterly profits in more than a decade - €4.3 billion more than analysts expected.

According to energy consultancy firm, Rystad Energy, the world’s leading oil and gas companies are set to shatter previous records this year.

Now there are renewed calls for a windfall tax on these oil and gas giants as people around Europe struggle to keep the lights on.

“Fossil fuel companies made bumper profits while people froze this winter, and instead of investing in renewables they've kept on driving the climate crisis and making their shareholders richer,” says Murray Worthy, gas campaign leader at Global Witness.

“They absolutely cannot be trusted to do the right thing, we urgently need a windfall tax to fund a massive wave of renewables and insulation.”

What is a windfall tax and how does it work?

To put it simply, a windfall tax is a one-off tax imposed by the government on a sector when it makes huge profits from a situation it has no control over.

With energy prices high, companies that extract oil and gas from the ground charge much higher prices than they would have done before. There has been greater demand as the world slowly recovers from the pandemic and the war in Ukraine creates uncertainty about supplies from Russia.

This scenario is an example of where an industry has benefited from circumstances it can’t control - leading to a windfall.

Several European countries, including Spain and Italy, have already introduced a windfall tax.

Several European countries, including Spain and Italy, had already introduced a windfall tax before Russia’s invasion of Ukraine made the situation worse.

In September last year, Spain agreed to remove taxes from home energy bills, instead enforcing a windfall tax on companies profiting from the crisis to make up for the lost income.

The subsidies will be funded by Italy’s windfall tax, introduced in January 2022, which will rise from 10 to 25 per cent.

In the UK, the Labour party has repeatedly called for a one-off, year-long levy arguing that it could raise up to €1.4 bn to fund discounts on home energy bills

Prime Minister Boris Johnson, however, has objected saying that a windfall tax could keep oil prices high in the long-term and hamper investments.

Greenpeace UK’s oil and gas campaigner, Philip Evans believes that is could be the "fastest and fairest way" to ease money pressures on households and reduce the UK's reliance on fossil fuels.

"By using a big chunk of the bloated profits that Shell, BP and others are raking in to make homes warmer, more energy-efficient and kitted out with heat pumps, the government could start to really tackle the climate and cost of living crises simultaneously," he says.

How has the war in Ukraine impacted oil and gas?

For some, huge profits made by companies buying Russian oil and gas are a slap in the face to Ukrainians suffering the impacts of war. While many have exited investments in the region following the invasion, there are still some nations purchasing Russian fossil fuels, such as India.

“Ukrainians have watched in disbelief as our partners in the European Union continued to purchase Russian fossil fuels, funding war crimes in our country to the tune of €1 billion every day,” says Oleg Ustenko, chief economic advisor to Ukrainian President Volodymyr Zelenskyy.

Despite this, he adds, companies are trading Russian fossil fuels, shipping and piping huge quantities of oil, gas and coal around the world.

Brussels has just proposed a ban on imports of all Russian oil by the end of the year. It could be part of the sixth package of sanctions resulting from the war in Ukraine.

“This will be a complete import ban on all Russian oil, seaborne and pipeline, crude and refined,” said European Commission President Ursula von der Leyen.

The reprisals are yet to be formally approved by member states and the vote could be derailed by countries like Hungary and Slovakia that are heavily reliant on Russian fossil fuels.

Von der Leyen added that it would not be easy, but “Putin must pay a price, a high price, for his brutal aggression.”