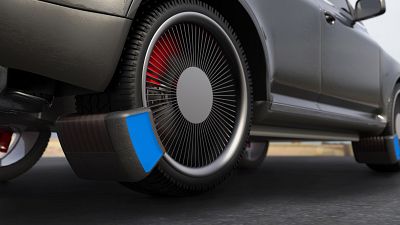 Device that captures microplastic particles from tyres as they are emitted.   -   Copyright  The Tyre Collective
By Doloresz Katanich  •  Updated: 02/05/2022

University students have invented a way to capture harmful tyre dust - a major contributor to air and water pollution and they have just been awarded a prize for it. Again.

UK-based startup, The Tyre Collective has been working on tackling the problem of tyre wear.  According to the UK government, the dust it emits is the second-largest microplastic pollutant in our oceans.

We all know tyres wear down, but have you ever considered where all those particles go?

“Everyone who has watched an F1 race knows that tyres wear down but just never made that connection to think about where do all these particles go and actually it’s a massive problem that needs to be addressed,” says Co-founder of the Tyre Collective, Hanson Cheng.

The team,  four students from Imperial College London and the Royal College of Art, have created a device which attaches to a car tyre and uses electrostatic and the aerodynamics of a spinning wheel to collect the tyre dust as it's produced.

Pollution from tyre wear could be 1,000 times worse than what comes out of a car’s exhaust, Emissions Analytics has found. But this new device can remove up to 60 per cent of tyre wear particles on the roads.

The Tyre Collective's invention has been named one of the winners of the inaugural Terra Carta Design Lab competition.