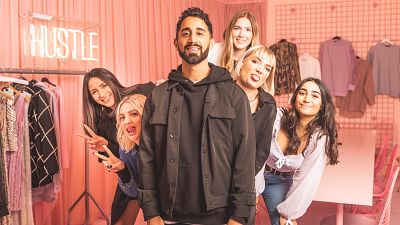 When Channel 4’s Inside Missguided documentary aired this summer, critics were quick to highlight the disparity between the “boss babe” culture it presented and the reality of the fast fashion brand’s operations.

The show placed female empowerment at the heart of the Missguided ethos, with no mention of the anti-feminist issues within the company – from the exploitation of female garment workers in their global supply chain to the 46 per cent pay gap in favour of men.

This is just one example of what is being coined ‘woke-washing’.

Why is woke-washing rife in fashion right now?

Misleading marketing can make it hard for shoppers to make the right choices. It’s an issue ethical fashion advocates Ruth MacGilp and Alice Cruickshank really care about and felt compelled to cover on their podcast, Common Threads.

“People shop with their values now - but brands haven’t changed theirs,” says MacGilp on why woke-washing is everywhere today. “They’ve just changed the way they communicate them.”

For MacGilp and Cruickshank, social media has shaped this values-driven relationship between consumers and brands - in a positive way. Platforms like Instagram have made conversations about social issues more immediate and widespread and given shoppers the power to publicly call out brands on things they care about.

“Brands don't really have the option to say nothing anymore, so they'd rather put something out, whether that’s truly reflective of their business or not,” says Cruickshank.

In 2020 especially, there are numerous matters brands feel pressed to have a viewpoint on, from the Covid-19 pandemic to Black Lives Matter. Beyond posting content and statements in an attempt to stay relevant, fast fashion companies are also quick to create products pegged to current issues their audience cares about.

While their feeds might suggest these brands care, their actions prove otherwise. For instance, Boohoo was selling social distancing slogan t-shirts, while simultaneously being accused of breaking Covid-19 guidelines for photoshoots and having ties to suppliers forcing staff to work while sick with the virus.

Issues based products remain contentious even when there's a charity label attached. Fast fashion brands create these items to benefit themselves, first and foremost, says Cruickshank. So, their own operations undermine the very causes they’re supporting. And as these brands often use loss-leading products as a marketing tool to drive traffic and increase sales, it’s likely the same technique applies to charity items.

Their own operations undermine the very causes they’re supporting.

She points to In The Style’s #BeKind charity t-shirts, which raised money for the Samaritans, as a prime example of this. Released after the shocking death of Caroline Flack, which sparked a society-wide discussion about mental health awareness, the benefit for In The Style was two-fold: good PR thanks to generous shoppers raising money through sales - and a spike in visits to their site.

Meanwhile, In The Style ignores how fast fashion business models like their own affect the mental health of garment factory workers. These are people under pressure from exceptionally short lead times on items just like the #BeKind t-shirt, working long hours for low pay and in poor conditions to meet demand.

MacGilp comments on how these products also enable performative activism, or ‘clicktivism’, by consumers, even when bought with the best intentions. “You might think, I've got a t-shirt that says I care about depression or gay rights or Black Lives Matter or feminism – I’ve done my bit. But that's not activism, that's consumerism.”

How to spot woke-washing in action

Thanks to slick PR and marketing, it can be hard to tell when a brand is woke-washing. Unfortunately, it falls on the consumer to do some digging and decide whether a brand genuinely stands for values it publicly aligns with.

Gordon Renouf, CEO of ethical fashion app Good On You, suggests becoming familiar with common woke-washing and greenwashing techniques to help you cast a critical eye over brand claims.

“Some brands divert attention away from harmful business operations by emphasising one initiative but failing to address all areas of impact. Be wary if they announce a few easy but insignificant issues to work on, especially if they’re only implemented at the head offices, or if they set targets for the future but aren’t doing anything now,” he says.

Language is important too. Renouf advises looking out for buzzwords and general statements without any concrete information or big claims followed by fine print, making targets look bigger than they are.

You might think, 'I've got a t-shirt that says I care about depression or gay rights or Black Lives Matter or feminism – I’ve done my bit.' But that's not activism, that's consumerism.

“On the positive side, look for brands that are 100 per cent certified by high-quality schemes like Cradle to Cradle and Fair Trade, as well as brands that provide detailed information about paying genuine living wages – including how they’re calculated.”

Good On You’s own system for rating brands was recently updated to more comprehensively consider pressing issues such as modern slavery and gender equality, offering a good starting point for researching fashion companies.

If research leads us to believe a brand is woke-washing, should we call it out? Even if it’s a major brand, both Cruickshank and MacGilp think it’s always worthwhile, as the fashion industry evolves from criticism.

“You might think messaging a brand won’t make a difference,” says Cruickshank. “But when thousands of people contact them about the same issue, the brand can’t ignore it. So don’t feel like your input can’t make a difference because it absolutely can.”