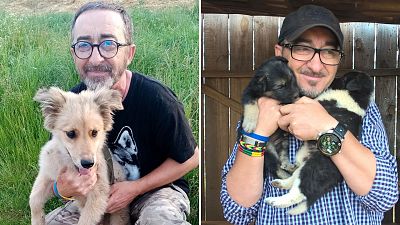 There is shooting going on outside, as we speak. He has a tired voice, maybe a bit resigned, but calm.

Andrea Cisternino has been living in Ukraine for 13 years, not far from Kyiv, where he created his own award-winning animal shelter. We chat about his life and what his experience has been on the ground since the invasion began.

Originally a fashion photographer from Italy, Cisternino married a Ukrainian woman. He tells us that they don't want to have to abandon the 400 animals they have rescued so far in his shelter.

Cisternino has already faced some hardship in his life. During the Euro football championships, he was targeted by ‘dog hunters’ looking to locate the animals for a reward. At the time, the government was giving out licences and money to those who killed stray dogs. As a result, his shelter was set on fire.

So what did he do? He started all over again.

Then, a few years ago, the first tensions of the conflict in the Donbas erupted - and for the first time he thought he better accumulate provisions, because you never know what's to come.

But a war like this…no, he didn’t believe a Russian invasion was possible. Cisternino did not expect this would happen. For the first time in his life he discovered the smell of gunpowder.

He doesn't speak like a member of the media, it's just the strange normality of someone who's suddenly immersed in a war. Not only does he speak of shooting or bomb shelters forming in supermarkets, he also speaks about normal life.

They're shooting, unfortunately this is the situation. This is a sudden and incomprehensible war.

A life so different from other normal lives, and yet similarly shaken by a sudden and incomprehensible war.

"They're shooting, unfortunately this is the situation,” says the animal rescuer.

“Also here, in the close-by villages, they destroyed a bridge so that Russians won't be able to cross. We hear the Russian planes and the helicopters going to the Antonov airport (also known as Hostomel) which they took over and which is some 30 kms away from here.”

You say "usually", but it's been happening for a couple of days, right?

"Yes, we have been in this situation for a few days but it already feels like six months.”

And you’ve lived here for many years?

"I've been here since 2009. I married and, as a photographer, I started documenting what was happening during the 2012 Euros Championship, then I decided to build an animal shelter and many things changed - my life changed."

“It is an animal shelter that was initially for dogs, then also other animals, like horses.”

Do you think you'll now need to shelter people - maybe fleeing from Kyiv, as it might remain a bit safer there? Or maybe you'll have to escape yourself - what do you foresee?

"I don't know, I’m staying here for my animals. It depends on what happens, but 400 animals is a huge number to transport anywhere, to bring them away, and to find a place for them. There are horses, cows, dogs, cats…a bit of everything.”

“Also the shelter cost a lot for me - it was a sacrifice, so it's not easy to leave everything behind. At the moment I don't know, I'm here."

You don't have any supply difficulties yet, do you?

"I never imagined he (Putin) could bring about this madness, because for me this is pure madness.”

“But, I was already accumulating some extra provisions for the dogs, the cats and the horses because of what happened in 2014 with the situation in the Donbas. I’ve been trying to never find myself in the same situation, I was thinking it was not going to happen, but I was able to buy some stuff before everything was shut down.”

Your shelter has had some problems in the past with locals, because there was a dog hunt authorised by the government - are you more accepted now?

"Today we collaborate as a community - after three hard years I won my battle. We buy the food for the dogs nearby, we buy wood from locals. I even started a free sterilisation campaign and many came from the village. They started understanding and they even apologised for the way they had been behaving. Because they hadn't understood until then. So it's okay, more than anything for my animals."

You say your wife is Ukrainian, how is she feeling about all this? Did she ask you to leave, or does she agree that you should stay?

"She's in Kyiv now, I spoke to her on the phone just a few minutes ago. She said she's been out shopping and for a stroll. She wants to stay there in the city centre - and I'm here. But no, for now there's no question of leaving, we’ve never thought about this.”

Your wife is in Kyiv and the situation is not easy there. There's fighting, there are continuous alerts, and some necessities must be difficult to find - people must be panicking and buying in bulk?

"That has already happened, yesterday the supermarkets were empty."

But your wife was able to buy some things. Did she feel calm about it?

"Yes, she's not leaving the flat now, she is calm, anyway there's the curfew from 10pm to 7am, we have to turn everything off.”

(sound of an incoming message on his phone, he looks down)

“I'm receiving a lot of messages, people want me to update them, as they haven't heard from me for a few hours and they're a bit worried. I'll post on Facebook, hoping nothing happens before that."

If anything does happen, you have no place to take refuge here. There is no metro or anti-aircraft shelter, what will you do?

"Well, the underground stations in the city are not really anti-aircraft shelters, I don't know if they could resist a bombing.”

“Nothing, they wanted to know if everything's ok. Let's say so.” ("they" are his friends in Italy and elsewhere)

This is a very difficult situation to comment on, even more so to live ...

"I’ve never seen a war before. This morning I was looking out of the window, 1 km away there was a mortar hit and I smelt gunpowder, I was not used to it.”

“In life, well, the important thing is that everything goes well, we are here in open fields, out of the militarised zones. Everyone here in the village is all at home, they are all staying here, nobody is going away. Also because they wouldn't know where to go."

“Now they're shooting again, outside..."

"Heavy artillery. So I don't know, the guys who work with me are here…"

How many are you there?

"Five. Now the other two should arrive.”

The explosions you hear from time to time, where do they come from? The airport zone or a different direction?

"Now there are shots coming from two opposite sides, the smoke is arising from the right and left. But mainly they start from there (the airport), I think. But now they're fighting not far from here, so..."

So they are not just shots by the Russians against infrastructures - they are combat blows, exchanges?

"Yes, I think so. Exchanges. I can't move from here. It would be dangerous to move."