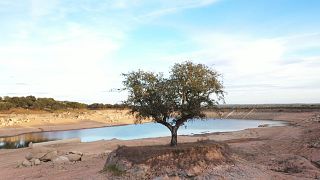 So far this year it has barely rained in Portugal, with 95 per cent of the country facing severe or extreme drought conditions. Farmers are on the frontline of this climate change trend, and in this episode of Climate Now, we take a look at how they are coping, what technologies they can use to make the most of the water they have and hear the bleak outlook for the decades ahead.

To begin, our regular roundup of the latest data from the Copernicus Climate Change Service.

The map of temperature anomalies confirms that figure, with Europe and much of Russia shaded in red, indicating warmer than average temperatures.

But it was a quite different story from Alaska to Greenland and right down to Texas in the US, where temperatures were in some cases well below the February average.

In Antarctica, it's the end of summer and the sea ice reached its second-lowest monthly average on record. Around the continent, there were 0.9 million square kilometres less sea ice than average this February.

Portugal in the grip of an extended drought

In Portugal, 95% of the country is now facing a severe or extreme drought due to dry conditions hitting the entire Iberian peninsula this winter.

It means farmers are facing an extremely tough growing year ahead.

So how are they adapting? Euronews travelled to eastern Portugal to meet farmer José Maria Falcāo, who took us on a tour of his farm, called Torre Das Figeuiras.

Our first stop is a bright green field of barley - to the untrained eye, it might look perfectly healthy, but José Maria told us that he can already see that the plants are suffering from a lack of water. The barley should normally be taller, thicker, and have longer roots, but it has been weakened by a lack of rain and is succumbing to fungal infestation:

"This is typical when the plant is weak. When it needs to grow and it's left wanting everything bad happens to it, like a person who is sick and malnourished who gets ill a lot easier," José Maria explained.

You don't need to be an experienced farmer to see that the large irrigation reservoir on his farm is almost empty. The reason is simply a lack of precipitation: José Maria recorded around 10 millimetres of rain in January and February, compared to 200 millimetres in the same period last year.

For the moment his olives, pomegranates, almonds and other crops are irrigated using water from a nearby river. José Maria has the permits he needs to use these sources, but he knows that supply cannot be guaranteed later in the year, and the cost of pumping water well over a hundred metres uphill is just going to grow as energy prices rise.

"It's the middle of March, and the water level in this reservoir should normally be way above my head. So is this climate change, or just natural variability?"

At the Portuguese weather service IPMA, climatologist Vanda Pires says global warming is playing its part in the drought they are observing this year.

The last two decades have not only been warmer on average in Portugal, but they have also been the driest since records began. It means that droughts are now more frequent, and unusually wet years are rarer.

This figure from IPMA showing rainfall anomalies since 1930 compared to the 1971-2000 average shows how droughts have become more common since the beginning of the 1990s.

Vanda Pires tells Euronews that this trend will continue. "At the end of this century projections point to decreases in precipitation across the country. These differences could be precipitation losses of 15% to 20% in the north and 30% to 40% in the southern region, which is quite significant," Vanda said.

Back on the farm, José Maria shows us the computer-controlled irrigation system, soil moisture probes and growth sensors he uses to keep his almond trees alive and productive. He has a total of 48 soil probes across his 2,200 hectare farm, and regularly consults data from the Sentinel satellite fleet to survey his land.

"I can't rely on my eyes, by looking, I don't see anything. I have to look underground to see where the humidity is. And this is how I can manage a crop that needs a lot of water with very little water."

That faith in technology and data is echoed by irrigation expert Gonçalo Rodrigues - who says we need to deploy every possible tool to better manage the water that we have.

"We have to accept this as a way of being, a way of life and adapt to this reality we are living in as best we can," he explains.

"We have to learn and make the best use of available technology to be more and more effective and more efficient," he concludes.