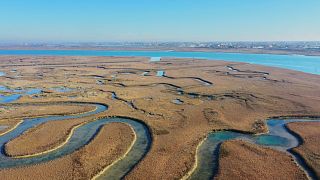 Saltmarshes can store carbon from the atmosphere fifty times faster than a tropical forest. As part of our monthly update on the state of our planet we visit the Venice lagoon with scientists working to protect these special wetlands and ask if these environments could be nature's secret weapon against climate change.

"I think the role of saltmarshes is underestimated. We have to make it clear that they are a resource, and it's essential to preserve them."

Firstly, here is our unique monthly update on what's really happening to our planet with the latest data from the Copernicus Climate Change Service for January 2022.

On a global level temperatures last month were 0.3 degrees Celsius above the 1991-2020 average.

There were some notable hotspots around the planet. In Argentina the ongoing heatwave meant the country set 75 new high temperature records for January.

Eastern Canada and the US was colder than average and then across Russia all the way to Kamchatka peninsula it was much warmer last month.

Zooming in on Europe, in the middle of the month, Oslo hit an all time high for January of 12.5 degrees. Then in most of France and parts of Spain it was cooler.

Staying in Spain, the Iberian peninsula continues to be much drier than average. This graphic below shows the soil moisture anomaly for January, and that's the continuation of a trend over the past four months.

The wonder of wetlands and climate change

Saltmarshes are havens of biodiversity and act as natural barriers to storms - but they can also sequester carbon from the atmosphere 50 times faster than a tropical forest. Setting off from St Mark's Square we went on a mission to discover the salt marshes of the Venice lagoon.

Today the marsh land around the Italian city is 43 km2, which allows it to sequester around 25 percent of the CO2 emitted from boat traffic. Two hundred years ago the wetlands stretched over 180km2, which would be enough to offset all boat traffic in Venice if they were still around today. The wetlands have been degenerated by a lack of silt and sediment plus erosion, all of which are linked to natural phenomena and human actions and activities.

According to Andrea d'Alpaos, a professor of Geoscience from the University of Padua, these vulnerable ecosystems need to be better valued and protected.

"There is a lack of awareness of the potential of these systems to store organic carbon and help to combat climate change."

That potential he's talking about relies on a relatively simple process. First the plants capture CO2 from the atmosphere as they grow, and then they are regularly flooded by sediment-rich tides which bury foliage and roots in the mud.

Showing us samples taken from the saltmarsh, Professor of Sedimentology Massimiliano Ghinassi, also from the University of Padua, explained that you can literally see carbon sequestration in action on the lagoon.

"In the uppermost part of the core we can distinguish several elements including both small and large roots like the one we have just cut.

"There's also a lot of other very small plant fragments like leaves or bits of plant remains that are what actually store carbon in the sediment."

Back in the lab

In the labs at the University of Padua the scientists can calculate how much carbon is stored in different wetland zones, and even determine its source. What they've found is there's a huge variety in carbon storage levels across the Venice lagoon:

"We have to protect them from erosion...

The lab results will be used to determine exactly which kinds of plants, soils and environmental conditions are best for sequestering carbon.

In the meantime, Professor Andrea d'Alpaos says its vital the wetlands are preserved.

"We have to protect them from erosion of their margins. And then we have to try to help them in their vertical growth by making sediment available that can settle on the surface of the sandbanks that can help them grow vertically and at the same time can bury organic matter in the soils for hundreds of thousands of years."

*this research was performed within the Research Program Venezia 2021, with the contribution of the Provveditorato for the Public Works of Veneto, Trentino Alto Adige and Friuli Venezia Giulia, provided through the concessionary of State Consorzio Venezia Nuova and coordinated by CORILA.