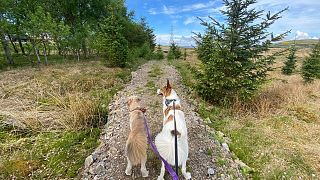 The environmental impact of dog poo is going under the radar, a new study suggests.   -   Copyright  Euronews Green
By Lottie Limb  •  Updated: 07/02/2022

Dog owners who leave their pets’ poo in nature reserves are doing a serious disservice to local biodiversity, a new study shows.

Fouling parks creates an eyesore and hazard to other walkers, and the little black bags left hanging from tree branches, awaiting a poo fairy, can be just as infuriating. Now scientists at Ghent University have found that dog faeces and urine are causing environmental problems too.

Each year, the mess adds on average 11kg of nitrogen and 5kg of phosphorous per hectare to nature reserves near the Belgian city,​​ according to the study published in the journal Ecological Solutions and Evidence.

This is particularly significant when compared to the total levels of nitrogen coming from fossil fuel emissions and agriculture across Europe, which range from five to 25kg per hectare.

“We were surprised by how high nutrient inputs from dogs could be,” says lead author Professor Pieter De Frenne. “Atmospheric nitrogen inputs from agriculture, industry and traffic rightfully receive a lot of policy attention, but dogs are entirely neglected in this respect.”

Why is dog poo so bad for the environment?

Your pooch’s poo is a kind of fertiliser, like sheep manure, so you might be wondering what the problem is exactly. But their nitrous content only helps a limited number of plants to grow: nutrient-demanding ones like nettles that outcompete rarer species, so reducing biodiversity.

“Our findings suggest that the currently neglected inputs of dogs in nature reserves could delay restoration goals.”

So land managers in low nutrient ecosystems are advised to educate visitors about the “negative fertilisation” impact of not picking up after their dogs.

The researchers are also calling for leash use to be enforced more strictly, and for more off-leash dog parks to reduce the pressure on nature reserves.

In fact, keeping dogs on leads is a legal requirement in these nature reserves. When the researchers ran a scenario in which all walkers were law-abiding, they found a big drop-off in fertilisation rates in the main parts of the reserves, but an increased rate around footpaths.

Over a year this input was as high as 175kg of nitrogen and 73kg of phosphorus per hectare.

Professor De Frenne says, “In our scenario where all dogs were kept on leashes, we found that in these concentrated areas around paths, nutrient inputs of both nitrogen and phosphorus exceeded legal limits for fertilisation of agricultural land.

“Which is quite staggering as our study concerned nature reserves!”

Clearly, protecting the reserves requires conscientious walkers willing to pick up after their dogs. In this scenario, where all dogs were on leashes and their faeces removed, fertilisation levels dropped by 56 per cent for nitrogen and 97 per cent for phosphorous.

This is because dog poo accounts for nearly all phosphorous that is deposited, whereas nitrogen is deposited equally by both faces and urine. So managers of nature reserves with sensitive ecosystems could consider banning dogs altogether.

Calculating the surprisingly sizeable impact of dogs (and careless owners) began with some simple groundwork: counting dogs. Over a year and half, 487 counts were undertaken to work out dog abundance per hectare in four nature reserves near Ghent.

As Europe is home to around 89 million dogs, a similar picture would emerge across the continent, the researchers said.

They added that the data could be improved by recording the different breeds of dogs - which sounds like a pleasant task - as well as analysing the soil to check their estimates.