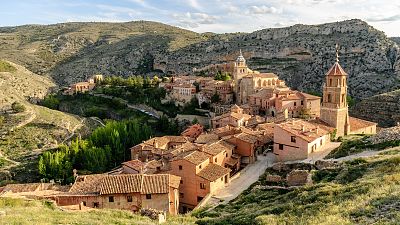 Vicente’s parents are no longer alive, but in the small, stone town of Calaceite on a remote Aragonese hillside, he still vividly remembers their stories. Vicente is 83.

He remembers how they talked of the Spanish Civil War, of the green-uniformed fascists, of the militia, of how their native language - a mix of Catalan and Spanish known locally as chapureáo - was outlawed by Franco. How in order to handicap the Republican resistance, the dictator banned communities from living in the countryside.

For modern Spain, this was the first real drive of people to urban spaces, a drive which continues today and has led vast swathes of rural Spain to be stripped of what were formerly thriving, sustainable communities.

This is what is now referred to as España Vacía, or Empty Spain.

Vicente remembers how his parents and their friends continued to speak chapureáo at home, to teach their children their personal histories, to read Federico García Lorca in secret, to keep their lives, memories and values alive underground.

What Vicente is remembering, of course, is his people’s cultural legacy of resistance.

Calaceite is in the Matarranya region of Teruel, a state which a decade ago was forced to remind the rest of Spain it was still there by running a marketing campaign called Teruel SI Existe (Teruel DOES Exist).

Teruel forms a broader part of the region of Aragon, and is comfortably the least populated state in Spain, known predominantly for black olives (Aragonesas), olive oil and almond production - as well as for the fact that nobody goes there.

This region is certainly an extreme example of modern depopulation, but it is by no means alone, with an estimated 90 per cent of the territory of Spain having suffered a mass exodus of population in the middle of the twentieth century. Accompanying this vast internal movement, for cost-benefit reasons governments subsequently cut services and resources to these rural areas, an act which in turn drove more people to the cities, and continues to do so.

To the industrial, holistic eye of government mechanics, these rural areas are now empty of society - a kind of terra nullius, and must be made to contribute to the national economy in other ways. Perhaps the biggest window of opportunity seen by successive governments across the political spectrum has been to open up these territories for the development of vast wind farm complexes.

The truth is, however, that Empty Spain is not empty at all, and continues to house historic communities across its territory, many of which have now developed themselves into models of local, sustainable economies - communities which in the national debate are struggling to get their voices heard.

Spain’s national energy demands are currently being fed by a variety of sources, but none is greater in importance than wind.

In 2021, according to the Spanish National Grid (Red Eléctrica de España), wind accounted for a quarter of all electrical production, and is growing one percentage point per annum.

This year, for the first time in the country, energy provided by wind overtook nuclear power.

In a European context, Spain’s wind production is second only to Germany, and currently runs at over 21,000 wind turbines, a statistic escalating weekly as the industry has been designated by the government as being a core driver of the COVID economic recovery.

The focus continues to be on satisfying insatiable urban appetites for energy instead of supporting more sustainable models of community living.

Proponents of wind generally state that it is a form of clean energy crucial to meeting the nation’s climate goals, that Spain has space and wind aplenty, and that its cities’ needs must be met from somewhere.

Critics, on the other hand, are frustrated that in a time of climate change, the focus continues to be on satisfying insatiable urban appetites for energy instead of supporting more sustainable models of community living.

And, more than anything, they argue that for these parks to be built they require local consent, rather than imposition from central government in Madrid, something anathema to the standard operating procedure of mega industry, globally.

A voice in the wilderness

Marcos Mateu is an ecological farmer and now accidental activist in Calaceite whose work is based on quality local produce cultivated by local families, in what is generally referred to as a slow food concept.

“We’re not against renewables, we’re very much in favour,” he explains, “but not in this manner whereby our natural heritage has been sold out from under us without any public consultation or environmental assessment.”

Our natural heritage has been sold out from under us without any public consultation or environmental assessment.

Mateu and other members of the community discovered in 2019 that the region was designated to be the basis of a massive wind farm project.

“Wind farms weren’t new to us, for twenty years now our neighbour state of the Terra Alta has succumbed to the never-ending expansion of wind power. We know what happened there - we see it every day; we feel how already marginalised rural communities were fractured even further by those developments.”

So Mateu and others did what all threatened peoples throughout history have done - they organised. Forming a group called Gent del Matarranya (People of the Mattarnya) they tirelessly canvassed people across the region, lobbied local politicians and businesspeople of the risks and dangers that such a massive industrial imposition would mean for the state.

They are not alone. Sister organisations like ALIENTE (Energy & Territory Alliance) realised the fortitude and drive of locals and joined the cause, seeing the Matarranya region as a test case for the behaviour of renewables nationally.

Luis Bolonio, spokesperson for the organisation, argues that public institutions need to rethink existing energy paradigms, and “inform and invest in sovereign energy to combat what is a national ecosocial crisis” destroying local communities. “Only by rethinking our relationship between energy and territory,” he perceives, “can we effectively combat the climate crisis and achieve a just and ecological energy transition.”

In some ways, Bolonio’s words go right back to the Republican call of the Spanish Civil War: “Land & Freedom.” Mateu concurs: “The real question is what kind of country do we want to live in, one in which everyone has a right to real local self-determination, or where only the cities matter and everything is placed in the service of exponential economic development?”

And so, once again, this tiny, forgotten region of north-east Spain finds itself at the heart of a struggle much greater than itself: what does rural and less populated mean in a modern capitalist economy?

Although similar wind farms are going ahead elsewhere, for the moment local resistance has meant that the project in the Matarranya has been stalled and the semi-autonomous Aragonese government is currently deciding what comes next.

Local activists, however, are arguing that a pause is not enough and a full cessation is necessary as complete environmental surveys and full and meaningful public consultations take place.

When politicians and businesspeople highlighted the Matarranya for development, they no doubt identified the thin spread of populations and vast space ripe for industrialisation, but nobody it seems, saw fit to look into the region’s history.

Eighty years ago, these people never gave up the fight; it would seem strange to expect them to do so now.