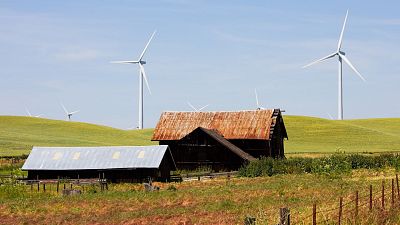 A couple living in France has been offered over €100,000 in compensation for having to live in the shadow of a wind farm for six years.

Christel and Luc Fockaert won their legal battle this week after claiming they suffered from symptoms of 'wind turbine syndrome', including headaches, depression, insomnia and dizziness, according to France 3.

The court ruling in Toulouse was one of the first of its kind and awarded the Belgian nationals €128,000 in damages for health problems they say were caused by the energy-producing turbines. The two wind farm companies ordered to pay up were Margnes Energie and Sasu Singladou Energie.

Wind is widely regarded as a clean, renewable energy source, and is one of the most cost-effective sources for electricity. It is a great alternative to fossil fuels, which ravage our environment and pollute the air.

This particular wind farm near a village called Fontrieu in Tarn, Occitanie, is in the heart of the Haut Languedoc regional natural park. It is not unusual for farms to be built in large rural areas like these - in fact there are currently 45 offshore wind farms operating in France.

French law states that the minimum legal distance between a turbine and a home must be at least 500 metres - and the Fockaerts say the turbines did comply with this distance.

However, they experienced both physical and mental problems nonetheless.

After buying the property in Fontrieu in 2004, six wind turbines were installed between 700 and 1,300 metres from the couple’s house in 2008. At first, they didn’t notice any effects on their health.

But five years later, a nearby wooded area was cut down and they say this was when they started to feel the impact of the turbines.

From nausea to heart irregularities, the couple purport to both have experienced the same symptoms for a number of years until they finally moved house.

Once they did move to another town in 2016, they claim symptoms completely disappeared.

“We are happy and relieved,” says the couple.

"They are producing green energy from far away, so they don't care at all about the concerns of residents,” adds Luc.

Alongside the noise, the Fockaerts complained that the flashing lights gave them "the impression of being in a permanent thunderstorm," reports Le Figaro.

“It was a truly terrifying assault on the eyes and ears, which was even more unbearable at night,” said Luc.

Emmanuel Forichon, from the environmental collective Toutes Nos Énergies - Occitanie Environnement, who accompanied them to the trial, stated that the ruling was “important and brave”.

“We already take into consideration the issues relating to the environment and biodiversity, and occasionally the impact on landscapes, but we don’t pay enough attention to the issues of human health,” he said.

But is ‘wind turbine syndrome’ a real thing?

Some thousands of anti wind-farm protest groups have been known to report detrimental effects of infrasonic noise on their health - as their primary weapon against wind energy.

Citing noise, visual intrusion, electromagnetic interference, harm to birds, distrust of developer objectives and lack of local ownership as their reasons - they do seem to boil down to nimbyism.

Simon Chapman is Emeritus Professor of Public Health at the University of Sydney, Australia, and is one of the most critical voices out there on ‘wind turbine syndrome’.

According to Chapman, it is merely “an illness that is spread by people talking and writing about it. In short: people are worrying themselves sick.”

In 2017, Chapman and ​​colleague Fiona Crichton wrote a book entitled ‘Wind turbine syndrome: A communicated disease’ in which they debunked the illness by exploring claims and tactics of the anti-wind farm movement and examined the (lack of) scientific evidence on offer.

Violently overcome by Wind turbine syndrome after driving sime 4 hours north of Berlin through almost unending wind farms. Oddly saw no one else so stricken pic.twitter.com/CFZgzZa9Lj

“For many years hundreds of thousands of wind turbines have been operating in many countries with probably millions of people living near them. If turbines really made us sick, there would have been queues around the block near hospitals with all the victims seeking help," Chapman tells Euronews Green.

“While generally welcomed in rural communities, there have been claims that wind turbines are responsible for a range of health problems. At last count an astonishing 247 symptoms had been attributed to wind turbines, from back pain and accelerated ageing to herpes and multiple sclerosis. Repeated reviews of the scientific evidence have found no grounds for these claims, yet they have continued to spread in some communities,” writes Chapman.

So despite the claims made by Belgian nationals, Christel and Luc Fockaert, the jury is out as to whether the syndrome has much scientific basis.