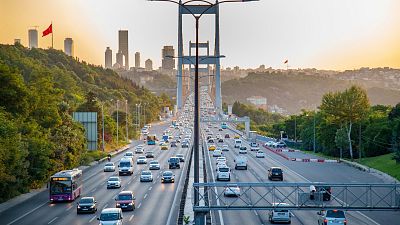 A wind turbine that generates power from passing traffic is the latest clean energy breakthrough to feature on the streets of Istanbul, Turkey.

The vertical devices, known as ENLIL, are able to harness air currents created by moving vehicles to produce energy, along with soaking up solar power at the same time.

Researchers at Istanbul Technical University worked with a team at tech firm Devecitech to create the roadside mechanism.

How do traffic turbines work?

The breeze produced from passing cars might not seem like much, but ENLIL’s long, unobtrusive, upright blades are powerful enough to produce one kilowatt of energy an hour.

A single turbine fitted with an additional solar panel on top can seamlessly produce enough electricity to power two Turkish households for a day.

Modern, well-designed standard wind turbines have a life expectancy of 20 years, something ENLIL could one day exceed due to its simplicity and durability. Each turbine follows a simple design, making it easy to assemble and also to fix.

The apparatus is small enough to be placed next to moving vehicles without disruption and takes up minimal surface area no matter where it is. This allows for easy transportation and assembly in areas where traditional wind turbines may not otherwise be practical, such as city streets and buildings.

But ENLIL’s environmental benefits extend further. The turbines also harness a number of smart technologies that track the temperature, humidity, carbon footprint and earthquake activity of the surrounding area.

Each measurement provides valuable information that is passed on to authorities and environmental scientists in Istanbul.

Where did the idea come from?

The idea was thought up by entrepreneur Kerem Deveci, who started working on the project while completing his civil engineering degree several years ago. His inspiration came from reading into one particular everyday occurrence that took place on public transport.

Deveci noticed during a journey on Istanbul’s Metrobus network that the vehicle he was travelling on was susceptible to wind influences - the covers of each emergency evacuation value wouldn’t stop flapping because of it.

Through observing this, he created a prototype from his bedroom that sought to turn the wind generated by moving vehicles into something useful.

A growing appetite for wind power in Turkey

Wind energy consumption hit record highs in Turkey last year and there is a burgeoning appetite for clean innovation. As of 2020, over 8 per cent of the country’s entire energy network is produced by wind power.

Turkey’s future capacity for energy production could take many forms. There are plans to collaborate on an offshore wind farm with Denmark, an €85.2 million mega-investment from the European Bank for Reconstruction and Development, and continuous schemes to expand green energy manufacturing on Turkish soil.

Though ENLIL may still be in its nascent stages, the project was given the ‘ClimateLaunchpad Urban Transitions Award’, and won the Mercedes-Benz Turkish StartUP Competition before it had even exited its research and development phase.

A successful rollout of the device across the Turkish capital could see other cities across Europe adopt similar initiatives.