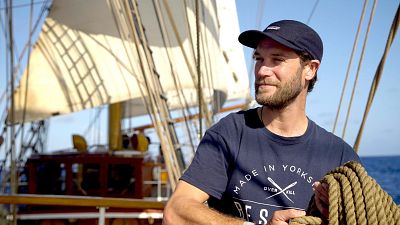 After returning from the Alaskan wilderness, James found himself searching for a wilder existence than bricks and mortar could offer.   -   Copyright  James Levelle
By Marthe de Ferrer  •  Updated: 12/11/2021

In the third episode of Euronews Green's new video series Low Impact Living, we spoke with adventurer and filmmaker James Levelle about being a 'river nomad' on the Kennet and Avon Canal in southwest England.

It's easy to see why James Levelle made the choice to live on a boat. Just a few minutes into our conversation, his energy and enthusiasm for nature, the wilderness and adventure in general is already clear to see.

James has lived an extraordinary life. From near-death experiences chasing hurricanes to documenting illegal pirate fishermen off the coast of Sierra Leone, he doesn't do anything half-heartedly.

And that applies to his living situation too.

From living in nature to the concrete jungle

After returning to London following several months of filming in Alaska - completely immersed in nature - James found himself struggling.

"It was the wildest, most spectacular existence I'd ever experienced. Every time I opened my curtains in the morning and looked out, it was like a picture postcard on steroids," he tells me. It's perhaps unsurprising that a flat in South London was no longer enough for James.

"I didn't really know what to do with myself," he explains, "but I quickly realised that bricks and mortar were no longer satisfactory."

Unfortunately at the time, James needed to be based in London for his work as a filmmaker - so any "wilder existence" would have to be confined to within the vicinity of the British capital.

But a chance stroll through East London proved to be exactly what he needed.

"While walking with friends, I came across the River Lea and saw all these fantastic, eclectic, beautiful houseboats," says James. "It was like a lightbulb moment. I thought 'Crikey! What if I lived in one of those?' So that's exactly what I did."

So six years ago, in what he describes as a "very therapeutic process", James downsized from his flat to his first houseboat.

"I was in a very beautiful spot near Walthamstow marshes, which is actually a nature reserve," he explains, "that was essentially my solution to a wild, more adventurous outdoor living set-up in the nation's capital."

Nowadays James roams the Kennet & Avon Canal near the city of Bath in his second boat, which is entirely off-grid.

"I decided I wasn't quite wild enough," he says, "so I ended up selling my boat in London and buying a new boat, which I'm on now, called Ellen this summer. I have upgraded - I like to think - to a more wild and rural existence, travelling the Avon River and the Kennet & Avon Canal."

Click on the video player above to see more of James and his life as a river nomad.