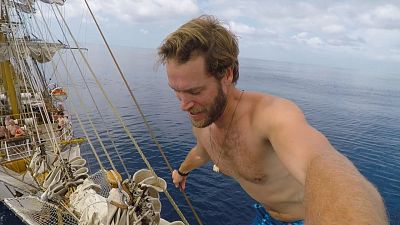 From the war-torn coasts of Sierra Leone, to the rainforests of Southeast Asia, James Levelle has seen it all.

The award-winning filmmaker has exposed the illegal tiger trade in Tibet, uncovered child-labour in the cotton fields of India, and documented the history of the gold rush in the wilds of Alaska.

But his most recent journey might just top the lot.

“It was the greatest and most uplifting adventure of my entire life,” says Levelle, speaking to Euronews Green from his canal boat in East London.

The adventurer - who once attempted to walk across South America without a phone, credit card or money - set off on a mission to document the concerns of young people directly impacted by the climate crisis.

“I’ve become known for going on massive, extreme journeys that have an extraordinary challenge to them, but journeys and adventures that I hope have a purpose,” says Levelle.

“With that in mind, I wanted to know how I could apply that to the climate and nature crisis.”

The filmmaker quickly formulated his plan: to travel 9,000 miles (14,500 km) from London to Chile - where the COP25 climate conference was due to take place - capturing video messages from youth climate activists along the way.

And true to his eco-spirit, he aimed to do so without using fossil fuel-powered transportation.

On the way, he cycled through France, jumped on a boat to Uruguay, and became the first person to drive west across Argentina in an electric car.

“But it was all worth it,” he smiles.

“On my journey to Chile, I got to see and experience the thousands of fantastic, clever, energised people out there who are finding solutions to each piece of this climate puzzle and taking action.”

The filmmaker is now on his way to Glasgow, where he will present the film of his adventure - Race For Future - at the 2021 United Nations Climate Change Conference.

Levelle is hopeful that the voices of the youth climate activists he met along the way will act as a catalyst for change.

“Repeatedly, I found over the 9,000 miles of my fossil fuel-free journey to Chile, young people coming together and just making a difference in any way they could.”

“It has filled me with belief, trust and faith that we can fix this.”