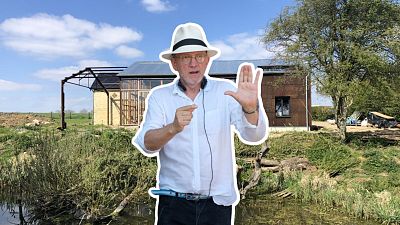 For the fifth episode of Euronews Green's video series Low Impact Living, we spoke with director and part-time farmer Steve Barron about why after decades in show business he set out to build a house made from hemp.

When Steve Barron turned 60 he felt an urge to do something meaningful for the planet for the sake of his young granddaughter. This urge led him on an unconventional journey from BAFTA nominated director to hemp farmer, as he built a stunning farmhouse in Cambridgeshire almost entirely from the plant.

“My main force in life has been creative,” Steve explains. “And I suppose I'm trying to bring that creative spark as well to environmental issues.”

It certainly took creativity to see the hidden potential of hemp. When he started researching the “much-maligned" plant five years ago, there were few architectural blueprints to follow.

How can you grow hemp legally?

The process was not easy. Even getting permission to grow it in the first place was challenging.

“You’d think it’d be DEFRA (the UK’s Department for Environment, Food and Rural Affairs) or the NFU (National Farmers’ Union) or some farming body [who regulate the growing of hemp], but it's actually the Home Office,” Steve says.

“They need to check you out and make sure you haven't had a drug past or drugs bust of some sort, which I hadn't. And so I got a licence from them.”

Hemp belongs to the same species as cannabis but it is non-hallucinogenic, containing low levels of the psychoactive compound THC.

It also has the capacity to be a great sustainable building material. It grows quickly and close together, meaning you can get large amounts of biomass from each acre.

Right now the construction industry is crying out for more sustainable alternatives.

It’s an energy intensive trade that contributes massively to the world’s emissions. For the world’s building stock to be carbon neutral by 2050, we need to halve emissions from the construction sector by 2030.

The path from director to farmer

Farming and construction is a far cry from Steve’s day job as a director. He began his career as a tea boy on sets learning from afar, before putting his talent to the test.

“I quite quickly did about 20-30 videos for all these English new wave bands,” he recalls.

His illustrious CV includes ‘Don’t You Want Me’ by the Human League. When Michael Jackson saw it he asked Steve to direct ‘Billie Jean’.

“Suddenly I was in Hollywood, 24 years-old, and being asked to send scripts for films and to direct.”

He went on to make the cult-classic ‘Teenage Mutant Ninja Turtles' and more recently ‘The Durrells’ and ‘Around the World in 80 days’.

“I was doing some really cool TV shows, but I wasn't feeling the same… thrill,” Steve says.

“We were nominated for a BAFTA and I just didn’t have the same feeling and I thought, what is that? And I think really what it was, was that it wasn't important enough. There were more important things to do.”

It was then that the motivation behind Margent Farm was born and Steve’s journey with farming and sustainable construction began.

Click on the video above to see how Steve grew a house from hemp.