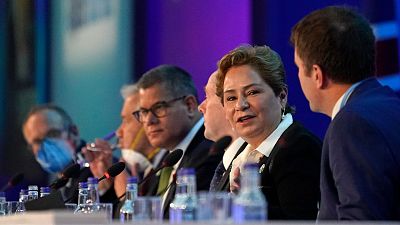 It's almost crunch time at COP26 with less than 24 hours left until negotiations to find a deal that will help limit global warming to 1.5 degrees Celcius are due to end.

Here is what you need to know as Day 11 wraps up:

Waves of tentative optimism were sweeping through COP26 today after the US and China announced a bilateral deal to redouble their climate efforts.

The joint statement issued by Washington and Beijing called for "enhanced climate action in the 2020s", including a new, stronger emission cuts target in 2025 and a pledge by China to follow the US lead in slashing methane emissions.

UN Secretary-General Antonio Guterres and others hailed it as "an important step in the right direction."

But some analysts thought the deal "lacked meat" on concrete commitments besides those on methane.

2. 'We're not there yet,' says COP26 chair as negotiations on cover deal continue

"We're not there yet. There is still much more work to be done," said COP26 chairman Alok Sharma as he briefed delegates on the progress of the talks, urging another “gear shift” in the final hours of the summit.

Meanwhile, UN chief Antonio Guterres said today that the goal of limiting global warming to 1.5C was "on life support,'' with COP26 talks so far not reaching any of the UN’s three goals.

The UK presidency said it planned on publishing the next draft of the cover deal overnight, with a new meeting of ministers planned for tomorrow morning.

COP26 is due to end on Friday evening, but an extension has not been ruled out.

3. Denmark and Costa Rica launch ambitious alliance to phase out oil and gas

Denmark and Costa Rica launched an ambitious alliance today to phase out oil and gas.

California, Portugal and New Zealand have also joined as associate members, while Italy will become a "Friend of BOGA."

Campaigners hailed the move as a "turning point" while urging more countries to join.

"The creation of this alliance puts to shame claims of climate leadership among countries like the United Kingdom, Norway, the United States, and Canada, all of which have yet to answer this simple question: Where is your plan to stop producing the fossil fuels that are driving the climate crisis?" asked Romain Ioualalen of Oil Change International.

"If this alliance can convince more countries and regions to join, isolates laggards, and pushes its members towards more ambition, then it will be a success," he added.

4. EU criticised for allegedly backing €13bn worth of gas projects

Climate activists slammed the EU for alleged plans to back €13 billion worth of gas projects in its latest list of Projects of Common Interest.

“For the EU to be talking about climate leadership while pumping billions of euros of public money into fossil gas reeks of hypocrisy," said Nick Bryer, 350.org’s European Campaigns Director.

“Exiting out of coal, for a number of member states, will have to happen through an intermediary phase using natural gas,” said the EU's Vice-President Frans Timmermans at a press conference.

He added that the bloc would seek to ensure the pipelines could in the future be used for clean fuels such as hydrogen.

On Cities Day, the summit turned its focus to building sustainable urban centres. Over two thirds — 68% — of the global population is projected to live in cities by 2050, according to UNFCC.

"It will also take cities and states, businesses and universities, tribal nations and faith organisations, and everyone in between - because this is an all-hands-on-deck situation," he added.

Cities Day was marked with the usual raft of financial pledges, including £27.5 million (€32 million) from the UK to "support cities across Africa, Asia and Latin America to take climate action and create a sustainable future."