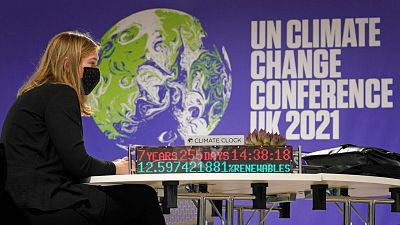 A delegate sits on a table that has an installation showing the 'Climate Clock' inside the venue of the COP26   -   Copyright  AP Photo/Alberto Pezzali
By Euronews  with Reuters  •  Updated: 10/11/2021

The first draft of a COP26 agreement has been published.

The seven-page document is the first version of the agreement that will outline how countries plan to cut emissions and keep global warming below 1.5°C.

Released by the UK, it urges countries to strengthen their climate plans by the end of next year and, for the first time, calls for the phasing out of coal and fossil fuel subsidies.

Diplomats from the nearly 200 countries represented at the COP26 climate change summit in Glasgow will on Wednesday begin to negotiate the text hoping to strike a final deal before the conference comes to a close on Friday.

Poorer, climate-vulnerable countries have called for other nations to cap warming at 1.5°C - a temperature increase scientists say is just short of calamitous.

The push for more regular reviews of climate plans is seen as necessary because countries' current 2030 pledges would lead to 2.4°C of warming.

CAT global update: Glasgow has a credibility gap between talk and action. If all govts met their 2030 targets, we would have 2.4˚C of warming in 2100. But right now, current policies put us at 2.7˚C. https://t.co/dkX4jAbo2f
A Thread ? pic.twitter.com/EdLlIfdhXt

Earlier in the summit, the world was told that even 2°Cwould be a "death sentence" for island nations.

The draft, which the UN released just before 6 am UK time, also calls on countries to "accelerate the phasing-out of coal and subsidies for fossil fuels," a demand of climate change campaigners.

It also urges developed countries to "urgently scale up" financial support for developing countries, responding to their need to adapt to the impacts of climate change.

The draft ticks all of UK Prime Minister Boris Johnson's boxes on his pre-COP checklist with mentions of coal, cars, cash and trees. But critics say it is notably light on the last point with financial pledges lacking specifics.

UNEP director, Inger Anderson has also acknowledged that the commitments in the deal meet the UN's criteria for success in Glasgow.

This is because the draft secures $100 billion in climate funding for vulnerable nations, half of that going to adaption for the worst impacts of global warming, and includes pledges to half greenhouse gas emissions by 2030.

Campaigners are concerned because usually the first draft of a COP deal starts ambitious and is then "watered down" as countries negotiate.

Greenpeace says that this draft is already "exceptionally weak".

“To keep 1.5 alive, four words must be added: ‘fossil fuels phase out’, and countries must come back next year to close the gap,” says Jennifer Morgan, executive director of Greenpeace International.

Negotiators shouldn’t even think about leaving Glasgow until they’ve agreed a deal that meets the moment.

Because most assuredly, this one does not.
#COP26

Edwin Namakanga is a 27-year-old activist from Uganda who arrived on board the Greenpeace Rainbow Warrior ship last week. He has a message for world leaders.

"The result from Glasgow must be the end of new fossil fuels, and there must be proper financial support for countries in the Global South.

"We need solidarity and just transition to renewable energy, because anything less is a death sentence for whole peoples, countries and areas."

Murray Worthy, campaign leader at Global Witness believes that the "impact of hundreds of fossil fuel lobbyists" at COP26 can be seen in this draft.

The science is clear – we must start phasing out all fossil fuels, starting now, if we’re to have a hope of limiting warming to 1.5°C.

"The science is clear – we must start phasing out all fossil fuels, starting now, if we’re to have a hope of limiting warming to 1.5°C.

"Yet this agreement falls spectacularly short – only calling for an accelerated phase-out of coal, and an end to taxpayers bankrolling the fossil fuel industry through subsidies.

"This simply does not match the ambition people all over the world have looked to COP26 for. Nor does it match what is needed to avert the climate crisis the world is currently experiencing."