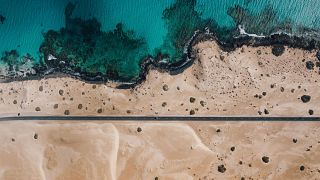 It’s Transport Day at COP26 and as negotiators focus on transforming aviation into a net-zero industry, we want to introduce you to the commercial pilot sharing his view of Earth from the cockpit.

Joris Kuijper, a commercial pilot for KLM Royal Dutch Airlines, developed his passion for photography during his downtime on long-haul flights.

We spoke to Joris about his favourite sights, and got his take on the future of the aviation industry and its relationship to the climate.

What are your favourite parts of the world to see from the cockpit?

I love flying over Greenland and seeing the spectacle of icebergs, glaciers and the pure emptiness of it. But I also love all the cityscapes, massive mountains and the desert. For me it doesn't matter where we fly, I always enjoy the views.

And I also love the way the northern routes change with the seasons. For example, in Canada or northern Russia the temperatures in the summer are around 20 degrees Celsius with lakes everywhere. But in the winter it can be as low as -40 degrees with just snow and ice everywhere. It's pretty fascinating to see.

What are some of the most impressive spectacles of nature you have seen while flying?

The most fascinating must be the northern lights. When flying high up north it's so impressive to see the green light just dancing around the plane and it's fantastic to witness.

The second one might be the noctilucent clouds. These clouds sit at 250,000 feet and light up just before sunrise or sunset. It's pretty difficult to capture from the flight deck, but very cool to see.

These clouds sit at 250,000 ft and light up just before sunrise or sunset. It's pretty difficult to capture from the flight deck, but very cool to see.

Aviation is being discussed a lot in relation to climate change at the moment, what are your thoughts on the future of aviation?

Aviation is still a tricky business, but ever developing and improving. We all love to travel the world and most of us have family and friends all over the world, so the demand is still there. Aeroplanes are so much more efficient and cleaner today compared to 20+ years ago, which is a great trend that is still developing.

I also feel that the alternative of long-haul aviation is taking a boat, which is even worse for the environment (unless it's a sailboat) and it takes forever to get somewhere. In the European Union a lot of effort is being put into alternatives for the shorter distances. Improving train connections and advertising them, which is fantastic news.

I think we should all play our part in the future and from what I see aviation is taking this very seriously, and new rules and regulations to enforce their promises are being implemented.

Aeroplanes are so much more efficient and cleaner today compared to 20+ years ago, which is a great trend that is still developing.

Inspired by his birds-eye perspective Joris shoots most of his images while travelling for work with a drone, from a helicopter, or from commercial jets (Boeing 777 & 787).

Of course, when shooting from the cockpit, Joris coordinates with the crew ahead of time and the photos are taken in a safe and prearranged manner.

"I fly the longer flights, which requires three pilots, therefore I often have time to take a few snaps when my shift stops and a colleague sits down in my spot and I can get over his or her shoulder", clarifies Joris.

KLM noticed Joris' talent for photography, and he now works with his employer both as a pilot and a photographer.