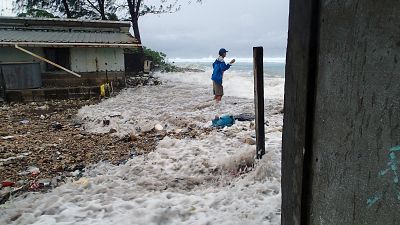 This photo taken on March 3, 2014 shows a resident surrounded by the on-rushing high tide energized by a storm surge that damaged a number of homes across Majuro.   -   Copyright  AFP
By Rosie Frost  •  Updated: 08/11/2021

“I'm less hurt when we are excluded, than when we're forgotten.”

While most of us look to the future when we worry about the effects of climate change, it is already a daily reality for those who live in island nations. Yet they are not being listened to at COP26, nor in many other discussions about the climate crisis.

“We're the ones battling. Some of what we're seeing happening in other regions now, are things that we as the canaries in the coal mine have been warning about for decades.” Moses, CEO of the Caribbean Climate-Smart Accelerator, says.

In many ways, islands are the canary in the coalmine in this situation.

It is a sentiment that was echoed by Barack Obama today when he addressed the UN climate change conference. The former US president is from Hawaii and said island nations were among those most at risk.

"In many ways, islands are the canary in the coalmine in this situation," Obama said.

"They are sending a message now that if we don’t act then it’s going to be too late."

But we've know this for a long time, the risk to island nations isn't breaking news.

Back in 2015, at COP15, the world was warned that Small Island Developing States (SIDS) could disappear entirely if sea levels rose unchecked.

So when will they finally be listened to? These beautiful countries that many of us love to travel to for tropical beach holidays but then forget about once we’re back home.

Worse still, these communities are some of the least responsible for the climate crisis. On average they emit less than one per cent of total global greenhouse gas emissions.

Suffering the worst consequences yet excluded at COP26

As Mia Mottley, prime minister of Barbados said last week, a temperature rise of 2 degrees above pre-industrial levels will be a “death sentence” for island nations.

Yet SIDS are some of the least represented at COP26, currently in its second week in Glasgow.

A third of Pacific islands announced they were unable to send senior delegations to this COP for the first time in history, according to Island Innovation.

Island nations aren’t the only voices missing from what was meant to be the “most inclusive COP ever” but for these vulnerable countries, it is vitally important we start to listen.

As Mottley pointed out in her speech, national solutions to global problems do not work.

“I think sometimes people forget that we're sovereign states,” Moses adds, “we need to be able to determine our own economic development.”

These countries need prevention rather than cure

If the Global North are excluding these nations from discussions, maybe they’re at least funding action to stem the tide of climate change?

Climate finance for SIDS actually declined by 25 per cent in 2019.

Racquel Moses says that these countries have the solutions, what they need now is the funding to put them in place. Using first-hand knowledge of what is needed to build resilience, they can prevent more lives and livelihoods from being lost.

“As a part of the Islands Resiliency Action Challenge, for example, we've built a resiliency scorecard that helps to assign funding to the areas most needed, as identified by islands.

"But empirically, so it's not the global north saying, ‘Oh, this... these are their areas of need.’

“It is us sitting down and saying, based on our areas of priority and our measurement of resilience, using empirical measures that we can all agree to, these are our priorities.”

The $100 billion (€86.3 billion) a year in climate funding affected countries were promised in 2020 finally seems to be on the horizon - three years late.

When it is available, getting access to that money can be hard. The countries that need it want more details so that it doesn’t continue to be a promise never met. Like a funnel, frameworks that dictate how it is handed out can mean that $100 billion from the top ends up being two or three at the bottom.

Over half of all the emissions in the atmosphere have come from developed nations. But they are often the most reluctant to make big changes until it’s almost too late. Even harder is convincing people that it needs to be spent on preparing countries for climate-induced emergencies rather than reacting to the consequences.

How much more wonderful would it be if you help prevent that level of damage if we were empowered to be a part of our own solution?

Moses says that for “every dollar you spend on resilience, you’d spend three rebuilding when a crisis hits”.

“Post-disaster everyone comes in and says how can we help? Let’s save the poor struggling Caribbean.

“And we appreciate the help when it comes. But how much more wonderful would it be if you help prevent that level of damage if we were empowered to be a part of our own solution?”

From Pikachu to mermaids: The best protest costumes from COP26