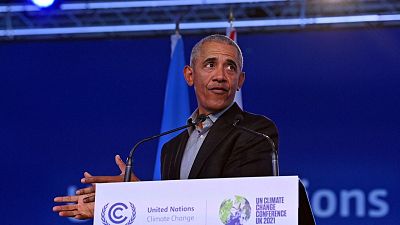 Former US President Barack Obama speaks during a session at the COP26 UN Climate Change Conference in Glasgow.   -   Copyright  PAUL ELLIS/AFP or licensors
By Euronews  •  Updated: 09/11/2021

After a quiet weekend inside the Scottish Events Campus (not so quiet outside) a whole new wave of visitors has arrived at COP26 -including Barack Obama.

Former US presidents aside, today was the day that ministers from the participating countries made their way to the summit to help with negotiations.

Here's five of the biggest takeaways from today at COP26.

1. "We have not done nearly enough" for climate, Obama tells COP26

Obama said that while "meaningful progress has been made" since the 2015 Paris agreement he contributed to forge, "we have not done nearly enough."

He criticised "two of world's largest emitters China and Russia" for declining "to even attend the proceedings."

"We can't afford anybody on the side line," he insisted while acknowledging the world was in a "moment of greater geopolitical tension."

He said climate change should "transcend day-to-day politics" and "geopolitics."

"How does that happen?" Obama wondered, "How do we bridge the gap?"

"I confess I don't have all the answers," he said.

2. Tough negotiations ahead as Ministers arrive in Glasgow

Ministers from all over the world have started arriving in Glasgow on Monday with a challenging task at hand. They must reach a consensus between the almost 200 countries on the rules that will govern the implementation of the 2015 Paris agreement.

Positions are still far apart, according to many observers. A long list of contentious issues includes international carbon markets, deadlines for climate targets and accountability mechanisms.

At a briefing on the first week’s progress, COP President Alok Sharma had to correct himself, noting that “some” issues had been settled, rather than “many.”

Numerous developing nations were pessimistic. They called progress "disappointing," saying announcements were high in quantity but worried that they were low in quantity.

Numerous developing nations were pessimistic. They called progress "disappointing," saying announcements were high in quantity but worried that they were low in quantity.

No deals have been made yet on the three main goals of the UN — pledges to cut emissions in half by 2030 to keep the Paris climate deal’s 1.5C temperature rise goal alive; the need for $100 billion (€86 billion) annually in financial help from rich countries to poor ones; and the idea that half of that money goes to adapting to global warming’s worst effects.

Adaptation was one of the themes of the Day at COP26.

On this occasion, the UK COP26 presidency announced several hundreds of millions of pledges of funding to support communities struggling to respond to climate change.

"Global leaders commit to a shift towards locally-led adaptation through over 70 endorsements to the Principles for Locally Led Adaptation and over $450 million (€388 million) mobilised for initiatives and programmes enhancing locally-led approaches," the statement read.

"$232 million (€200 million) has been committed to the Adaptation Fund, the highest single mobilisation to the Fund," it went on.

A new report by Christian Aid, a non-profit, warned of the "devastating economic impact climate change will inflict on the world’s most vulnerable countries."

Under current climate policies the world’s most vulnerable countries can expect to suffer an average drop in GDP of -9.6 per cent by 2050 and of 63.9 per cent by 2100, according to the NGO.

Christian Aid said the report shows how much Loss and Damage mechanisms are needed to help most vulnerable countries cope with the impacts of climate change.

Loss and Damage was also one the themes of the day at COP26.

But little progress has been registered so far on the demand from climate-vulnerable countries to receive compensation for the damages caused by historic emissions of wealthy nations. According to reports from inside the negotiations, many rich nations have pushed back against the idea of paying for loss and damage caused by emissions released in the past.

The finding is based on a review of the UN’s provisional list of named attendees, the group explained.

And the heavy presence of the fossil fuel industry at COP26 has not gone without criticism.

“COP26 is being sold as the place to raise ambition, but it’s crawling with fossil fuel lobbyists whose only ambition is to stay in business," said Pascoe Sabido, researcher and campaigner for Corporate Europe Observatory.