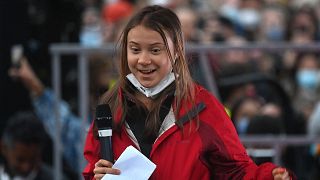 She appeared onstage after speakers from countries all around the world - Brazil, Argentina, Pakistan and Uganda, to name a few.

Thousands have waited to see her, especially after a no-show yesterday at another COP26 discussion panel.

“What will it take for the people in power to wake up?” she began.

“Let's be clear, they are already awake. They know exactly what they are doing.”

She used her speech to criticise leaders for not discussing the "root causes" of the climate crisis which, she said, are "colonialism and beyond". She went on to name some of the countries suffering on the frontlines.

Greta attacked the climate conference itself saying, “COP has turned into a PR event where leaders are giving beautiful speeches and fancy commitments and targets.”

But she didn’t stop there. She offered solutions too.

“We need immediate drastic annual emission cuts, unlike anything the world has ever seen. We will have to fundamentally change our society. That is the uncomfortable result.”

Concluding her speech, she said the media was responsible for not holding the people in power accountable for their inaction.

Vanessa Nakate takes to the stage at COP26

Today, she spoke on the youth stage to an enraptured audience.

“Historically, Africa is responsible for 3 per cent of global emissions. But Africans are suffering. While the African continent is on the frontlines of the climate crisis, they are not on the front pages of the world's newspapers.”

Stirring hope in the audience in front of her, she then painted a picture of what the future should look like.

“But the dry land can be glad again, the farms can blossom again, the animals can be joyous because there is water to drink. The pain and suffering is gone, there is a celebration of the people because the disasters are gone.”

“We won't have to fight for limited resources because there will be enough for everyone. There is food to eat and water to drink. Children can go to school with no fear of dropping out.

“Once flooded places will dry and bloom again. The power of the people will finally come, the world is green again.”

She concluded, “let us keep the faith for the future,” adding that there are three things that will stay with us from now on.

“Faith, hope and love. The greatest of these things is love. Because when we continue to love the people and the planet, that will be the strength we need to fight for a future that is sustainable, clean and healthy for all of us.”