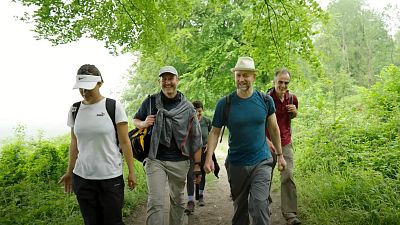 On Monday evening, a bedraggled group of walkers made their way through the doors of Strathclyde University’s Student Union in Glasgow.

There was none of the clamour which accompanied the arrival of world leaders to COP26, but for these ramblers their arrival was equally significant.

They had just completed an epic undertaking: walking 820-kilometres from London to Glasgow to raise awareness and promote positive engagement on the climate crisis.

“Working in London, you can spend a decade or more working 14 to 16 hour days and you think you’re living life,” says Sam Baker, a former strategy consultant for DeLoitte, who led the group.

“This was an opportunity to get out and to listen, to be educated around what people already feel about climate change.”

A mechanism for climate conversations

The team used Slow Ways to curate their route, a national network of walking trails designed by over 700 volunteers around the country.

Over the course of 26 days, the hikers battled rain, wind and storms to arrive on time for the beginning of the United Nations Climate Change Conference.

And true to their mission, they used the walk “as a mechanism for encouraging conversations between populations who don’t typically talk about climate change.”

“We engaged via school visits, which were the absolute highlight of the walk,” continues Baker. “It provided an opportunity for school children to ask questions about climate change, and that’s the most important thing.”

“The end of the world isn’t if you forget to switch the light off. It’s if you stay quiet, if you don't inform yourself, and that’s what we wanted to change.”

Along the route, the walkers also hosted town-hall meetings, visited eco-initiatives, and drove interest in the battle against climate change through a virtual walk-along.

“It was all about spreading the word about the steps that are needed to address the climate emergency. COP26 might go down in history as a critical moment that either failed or accelerated everything, and we wanted to share that.”