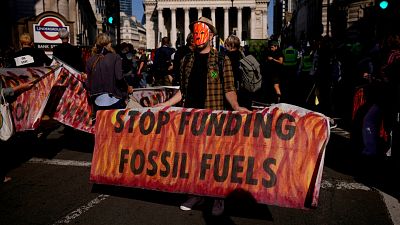 If UK pensions were a country, they would be among the top 20 greenhouse gas emitters in the world.

An analysis carried out by Make My Money Matter and Route2 has found that investments from UK pension schemes enable the release of 330 million tonnes of carbon every year. That is more than the country’s entire carbon footprint.

While our retirement savings don’t directly create emissions, the money is often invested in fossil fuel companies. It is estimated that for every £1000 (€1185) saved in the UK, £60 (€71) is invested in this polluting industry. That amounts to a total of £112 billion (€133 billion) being invested into fossil fuels.

“While pension funds do not directly produce significant greenhouse gas emissions, the way they allocate their capital has a significant impact on the long-term behaviour of the companies and countries they invest in,” says Danial Dias, founder of Route2.

Selecting pension schemes that are more climate-sensitive is an effective tool in combatting climate change.

He adds that the vast sums of money pension funds are responsible for, means they could have a significant impact on greenhouse gas emissions.

“It also demonstrates that selecting pension schemes that are more climate-sensitive is an effective tool in combatting climate change.”

Are our pensions being invested in a dying industry?

More than half of the largest pension funds in the UK have no published information about their investments, according to a recent report from Friends of the Earth (FoE). Of those that do, it found that 4.3 per cent of funds were invested in the top 200 fossil fuel companies - that is an average of £1,916 (€2,271) per UK citizen.

Despite 150 funds around the world making divestment plans, none of the UK’s largest pension funds was found to have a credible plan in place.

With the International Energy Agency recommending no new investment in fossil fuel projects as essential to reaching net-zero by 2050, Rianna Gargiulo from FoE says it shows pension funds are playing “fast and loose with workers’ hard-earned contributions”.

They are investing in an industry in decline, she says.

“Anyone shocked to hear that their pension may be heavily invested in fossil fuel polluters should write to their pension fund, ask about its investments in the industry and call on it to divest.”

Pensions shouldn’t ‘fuel the fire’ of the climate crisis

The money we save for retirement doesn’t have to fund polluting industries, however. In the Netherlands, the country’s biggest pension fund ABP has just announced that it will stop investing in companies that produce fossil fuels.

It manages the pensions of more than 3 million Dutch workers in the government and education sectors and has around €15 billion invested into fossil fuel production. It comes after many members of the fund demanded that it divest.

While we’ve seen green shoots of progress with voluntary net-zero commitments, £2 trillion (€2.4 trillion) remains in schemes which have failed to act.

In the UK, Chancellor Rishi Sunak recently announced new rules that would require asset managers, pension schemes and some large companies to disclose their environmental impact. Make My Money Matter says it is time for the UK to go even further. The campaign is calling for the government to make net-zero mandatory for all pension schemes and providers.

“While we’ve seen green shoots of progress with voluntary net-zero commitments, £2 trillion (€2.4 trillion) remains in schemes which have failed to act, undermining the UK government’s own net-zero targets,” says Richard Curtis, co-founder of the campaign.

“That's why we believe it’s time for the government to make net-zero mandatory for all pension schemes, and make sure the trillions in our pensions helps tackle the climate crisis, not fuel the fire.”