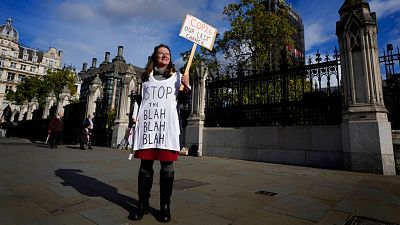 A lone climate demonstrator holds a banner outside parliament in London ahead of COP26.   -   Copyright  Kirsty Wigglesworth/AP Photo
By Rosie Frost  •  Updated: 26/10/2021

New national climate commitments fall far short of what is needed to meet Paris Agreement goals, according to a report from the UN Environment Programme (UNEP).

Known as Nationally Determined Contributions (NDCs), these embody the efforts by each country to reduce their emissions and adapt to the effects of climate change. As of September 30th, 120 countries had submitted new or updated NDCs.

The latest assessment of NDCs reveals that they leave the world on track for a global temperature rise of at least 2.7°C this century. They also only account for an extra 7.5 per cent reduction in global greenhouse gas emissions by 2030, compared to previous commitments.

“Climate change is no longer a future problem. It is a now problem,” says Inger Andersen, executive director of the UNEP.

“To stand a chance of limiting global warming to 1.5°C, we have eight years to almost halve greenhouse gas emissions: eight years to make the plans, put in place the policies, implement them and ultimately deliver the cuts. The clock is ticking loudly.”

A reduction of 55 per cent is needed to reach the Paris Agreement goal of 1.5°. The world has just eight years to cut an additional 28 gigatonnes of CO2 over and above what has been promised in the updated NDCs and other climate commitments. That is the equivalent of almost halving current global greenhouse gas emissions.

To stand a chance of limiting global warming to 1.5°C, we have eight years to almost halve greenhouse gas emissions.

The report comes as the World Meteorological Organisation says the concentration of greenhouse gases in the atmosphere has reached a record high.

At the launch of the study, UN Secretary General Antonio Guterres said that less than one week before COP26, "we are still on track for climate catastrophe".

He called it another "thundering wakeup call" after the IPCC report earlier this year, asking how many more we need.

The Secretary General added; "the emissions gap is the result of a leadership gap. But leaders can still make this a turning point to a greener future instead of a tipping point to climate catastrophe."

Net-zero commitments still provide hope, according to the report. Sticking to them could make a big difference and avoid the worst impacts of climate change.

A total of 49 countries have already made pledges, covering half of all domestic greenhouse gas emissions, over half of global GDP and a third of the world’s population. 11 of the targets are enshrined in law, making up 12 per cent of emissions.

If they are implemented correctly, the UNEP says that they could shave a further 0.5°C off global warming.

Many net-zero plans, however, delay action until after 2030 and some are still “highly ambiguous”. Pledges also aren’t in line with the NDC’s presented ahead of COP26.

The scientists behind the report say there is also a lot of potential to reduce methane emissions, the second largest source of global warming.

With very little or no cost, around 20 per cent of these emissions from waste, agriculture and fossil fuel could be cut. Because the gas remains in the atmosphere for significantly less time than CO2, cutting methane emissions would limit temperature increases faster.

Andersen explains that nations need to start putting policies in place to meet new commitments and begin implementing them within months to avoid the worst case scenario.

“They need to make their net-zero pledges more concrete, ensuring these commitments are included in NDCs, and action brought forward,” she says.

“They then need to get the policies in place to back this raised ambition and, again, start implementing them urgently.”

Where next on COP26? Here are some ways forward | View