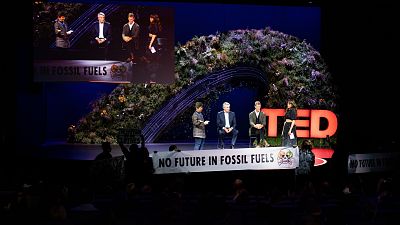 Youth climate activists dubbed the CEO of Shell “evil” and walked out of a panel at the TED Countdown Conference in Edinburgh yesterday.

Royal Dutch Shell CEO, Ben van Beurden was allowed to speak uninterrupted for the first portion of the panel. Activist Lauren MacDonald was also asked to share the stage with the fossil fuel boss alongside Paris Agreement architect Christiana Figueres and Engine No. 1 co-founder Chris James.

When invited to ask a question, MacDonald highlighted the company’s history saying that van Beurden was “responsible for so much death and suffering”, calling him “one of the most evil people in the world.”

She added that he should be “absolutely ashamed” of the devastation caused by the oil giant.

BREAKING ? activists reclaim the #TEDcountdown stage from Shell's CEO.@Shell is actively pursuing new oil & gas projects. They are the problem, not the solution.

“If you’re going to sit here and say you care about climate action,” she asked, “why are you currently appealing the recent court ruling that Shell must decrease its emissions by 45 per cent by 2030?”

The Shell boss did not immediately give a straight answer to MacDonald’s questions and she responded by saying; “I hope you know that as the climate crisis gets more and more deadly, you will be to blame. And I will not be sharing this platform with you anymore.”

Youth activists then joined MacDonald to unfurl a banner that read “No future in fossil fuels”. The group walked out of the auditorium shouting “don’t just watch, join us”.

A little behind the scenes view of the #StopCambo walkout at Countdown. pic.twitter.com/pef6CkbMdJ

Who was behind the walkout?

The action was organised by the Scottish campaign group, Stop Cambo who are focusing on preventing the creation of a new oil field off the coast of Shetland. UK Prime Minister Boris Johnson is currently preparing to sign off on the new development.

It is estimated that the oil field could lead to the equivalent of ten times Scotland’s annual emissions.

Stop Cambo and other activists say they had raised questions with the organisers about allowing space for fossil fuel bosses to speak. They called for van Beurden to be removed from the panel at the event.

“Fossil fuel companies, of any kind, should not be welcomed at events that claim to focus on climate justice,” says Francesca, a Stop Cambo campaigner.

“It is disrespectful to frontline activists - many of whom were not invited to this event and are unable to attend COP26 due to vaccine apartheid - as their communities are directly harmed by the decisions of these CEOs.”

"It is clear Shell has no real commitment to reducing its emissions, and allowing them a platform at TED Countdown is nothing more than another opportunity for greenwashing the fossil fuel industry," Francesca adds.

Daze, a climate justice activist and creative director for Stop Cambo, added that the action was young people saying that enough was enough.

"My family is from the Niger Delta, and I know the harm Shell has caused and continues to cause by pushing us closer and closer to climate devastation."

"We need Shell to commit to stopping the future harm caused by projects like the Cambo oil field, but also addressing the past harm like the murder of Indigenous activists. Without this, Shell is not part of the future we need."

When asked about its motivation for attending the event, a spokesperson for Shell said; “Tackling climate change will require unprecedented levels of collaboration between governments, companies, customers and many others.

“Shell is committed to being part of the solution and that’s why our CEO Ben van Beurden joined the TEDCountdown event in Edinburgh yesterday.

“While we knew that the reception would be tough, we won’t shy away from difficult conversations.”