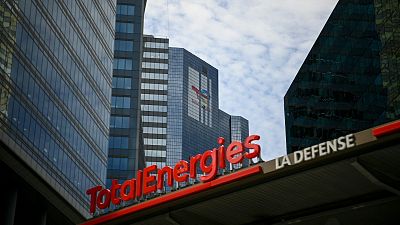 This photograph taken on May 28, 2021 shows the new TotalEnergies logo during its unveling ceremony, at a charging station in La Defense on the outskirts of Paris.   -   Copyright  CHRISTOPHE ARCHAMBAULT / AFP
By Rosie Frost  •  Updated: 20/10/2021

French oil and gas company Total was warned about the climate consequences of burning fossil fuels as early as 1971, claims a study published today.

Researchers at CRNS, Sciences Po and the University of Stanford used the archives of the oil group, now known as TotalEnergies, alongside interviews with former company executives and internal documents.

They uncovered research published in the Total journal in 1971 which explained that burning fossil fuels resulted in “the release of enormous quantities of carbon dioxide”.

They uncovered research published in the Total journal in 1971 which explained that burning fossil fuels resulted in “the release of enormous quantities of carbon dioxide”. It warned that continued consumption would increase carbon dioxide levels to “worrying” levels - potentially leading to the melting of ice caps and significant sea level rises.

Despite awareness of harmful global warming impacts, the article published in Global Environmental Change says that Total or its predecessors engaged in “overt denial of climate science” until the early 1990s. It also reveals that it took part in lobbying to prevent the regulation of its activities.

In a statement sent to AFP before the release of the paper, TotalEnergies said that its leaders “recognised the existence of climate change and the link with activities of the oil industry”.

The company claims that their “knowledge of climate risk was in no way different” from that which was coming from scientific journals at the time.

TotalEnergies did not respond to Euronews Green’s requests for an updated comment.

'A declaration of war on humanity'

On the back of the study’s revelations, Notre Affaire à Tous and 350.org are launching a campaign that calls on public authorities to hold the company accountable. They are also asking major banks to cut ties with TotalEnergies and have created a petition which will be sent to the CEOs of these financial institutes.

The two organisations say that the strategies used by the company over the last 50 years show that “the multinational’s priority has always been to protect its profits at all costs, regardless of the impact on humanity and the climate”.

They add that even today, TotalEnergies intends to increase its fossil fuel production capacity and continue with “devastating” projects in protected regions.

“The intensive development of new oil and gas projects is a declaration of war against humanity,” says Clémence Dubois, 350.org France team lead.

“Total’s plans to continue developing massive new oil and gas fields in the years to come could end up costing millions of lives.”

This is only possible, Dubois claims, because of the support the company receives from the financial sector.

“From all over the world, we are appealing to the banks: it is time to cut funding to Total.”

As COP26 negotiations are rapidly approaching, 350.org and Notre Affaire à Tous are demanding that governments and financial actors force TotalEnergies to align itself with the Paris Accords by ceasing the development of new fossil fuel projects.