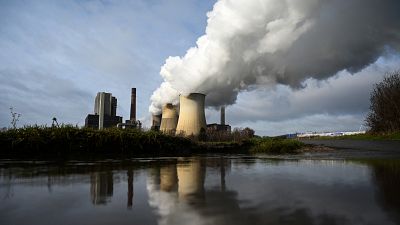 Steam rises from the cooling towers of the coal-fired power station of German energy giant RWE in Weisweiler, western Germany.   -   Copyright  INA FASSBENDER/AFP or licensors
By Euronews with AP  •  Updated: 26/10/2021

The concentration of greenhouse gases in the atmosphere reached a new record last year, the World Meteorological Organisation (WMO) said on Monday, just days before the start of the crucial COP26 climate conference.

"Concentration of carbon dioxide (CO2), the most important greenhouse gas, reached 413.2 parts per million in 2020 and is 149% of the pre-industrial level," said the United Nations agency, warning of "major negative repercussions" on human lives and well-being.

Many experts say the UN climate change conference in Glasgow, Scotland (Oct. 31-Nov. 12), marks an important opportunity for concrete commitments to the targets set out in the 2015 Paris climate accord.

“We are way off track. At the current rate of increase in greenhouse gas concentrations, we will see a temperature increase by the end of this century far in excess of the Paris Agreement targets of 1.5 to 2 degrees Celsius above pre-industrial levels,” Taalas said.

Another worrying finding in the report is that parts of the Amazon rainforest have gone from being a carbon “sink” that sucks carbon dioxide from the air to a source of CO2.

“One of the striking messages from our report is that the Amazonian region, which used to be a sink of carbon, has become a source of carbon dioxide," Taalas said. “And that’s because of deforestation. It’s because of changes of the global local climate, especially. We have less humidity and less rainfall.”

Human-incurred carbon dioxide emissions, which result mostly from burning fossil fuels like oil and gas or from cement production, amount to about two-thirds of the warming effect on the climate.

WMO said overall, an economic retreat last year because of the pandemic “did not have any discernible impact on the atmospheric levels of greenhouse gases and their growth rates, although there was a temporary decline in new emissions.”

Euronews Debates: How should China and Europe transition to clean energy?