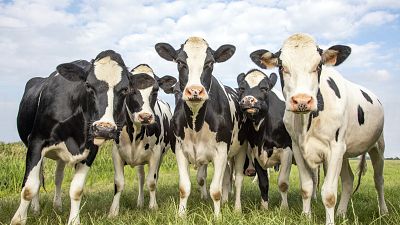 Despite our obsession with carbon dioxide, methane could be a handier ally to fight climate change

What do a rice field, a cow, a bog, and a coal mine have in common? Well, there might be more than one answer, but one thing is certain: all of them are “gassy”. They all release methane, a gas not as famous as carbon dioxide, yet infamous for its capacity to trap heat. And as its emissions are on the rise, the world is paying more attention to it. Scientists and governments see in methane a way to achieve faster results on climate mitigation. But to tackle methane means knowing exactly how much of it gets into the atmosphere and who’s to blame.

Methane comes from quite a few natural and human-related sources. About a third of its global emissions originate in wetlands, where massive amounts of organic matter produce methane when decomposing. Agriculture is the biggest contributor of human-induced methane, bringing in more than a quarter of anthropogenic emissions, primarily from livestock and crops grown in flooded paddies. Methane is a by-product of manure pits and ruminants’ burping, while in fields, such as rice, bacteria that decompose underwater create methane. Another quarter of the worldwide methane emissions comes from the oil and gas industry, which causes frequent gas leaks and releases methane. Other sources include biomass burning and thawing permafrost.

But what makes methane the second largest contributor to climate change is its power to heat the atmosphere – being about 20 times as potent per unit as carbon dioxide. This means that releasing 1kg of methane is like emitting 84kg of carbon dioxide. And as global methane emissions are rapidly increasing, we should expect more intense warming.

In 2020, methane reached its highest concentrations since satellite records began in 2003, according to preliminary data from the Copernicus Climate Change Service (C3S). The Global Carbon Project indicates a 9 per cent increase in 2017 compared to 2000-2006 and points to agriculture and waste management as two likely drivers of the rise. “Over the past decade, people realised methane was going up really fast – and this is very problematic,” says Dr. Drew Shindell, a climate scientist at Duke University and lead author of the UN’s 2021 Global Methane Report.

But the culprits are still under debate. “Surely, there is a strong human influence in this growth,” says Dr. Ilse Aben, a senior scientist at the SRON Netherlands Institute for Space Research and co-principal investigator for the TROPOMI instrument, which makes observations of methane onboard the Copernicus Sentinel-5P satellite. “But distinguishing natural from anthropogenic emissions is always complicated.”

While carbon dioxide remains in the air for 300 years, making it a matter of urgency to reduce its emissions, methane stays there only a little over a decade. So slashing methane emissions could provide quick benefits for climate mitigation. “What we found is that controlling methane is attractive and beneficial,” says Dr. Shindell about the UN report. “For example, if action to reduce methane is taken this year, we would see the concentrations changing already in the year after.” And as methane contributes to pollution – when it mixes with combustion exhausts in the lower atmosphere, it reacts to create ozone which harms our respiratory system – this reduction could bring immediate health advantages for people.

Climate, however, can take about a decade or more to benefit. “But that is still very fast compared to almost anything else you could do to mitigate climate change,” says Dr. Shindell. For example, cutting methane exhausts from oil and gas by 45 per cent in the next four years, which equals closing 1,300 coal-fired power plants, would benefit the climate in the next 20 years. At a larger scale, halving human-related methane globally by 2050 could reduce warming by 0.2°C in the next 30 years, says the European Commission. “People so far haven’t put that picture together – but as benefits are so obvious, it shouldn’t be that difficult to get people on board,” says Dr. Shindell.

Momentum for methane mitigation is growing. The European Union’s strategy on methane wants to boost ambition on reducing the emissions of the EU’s dominant non-CO2 greenhouse gas by 35-37 per cent until 2030 (compared to 2005 levels). To do so, it seeks to improve monitoring and reporting of methane emissions principally via its Copernicus Atmosphere Monitoring Service (CAMS). Earlier this year, the US State Department also announced it would invest $35 million into REMEDY, a programme that will develop technologies to reduce methane emissions in the oil, gas, and coal industries. Globally, 45 countries producing about three-quarters of the world’s methane emissions are part of the Global Methane Initiative, which also focuses on methane mitigation in these industries.

But to reduce methane at the source requires precise monitoring. SRON uses many measurements in-situ across the world, where people take samples of air for analysis explains Dr. Aben. “That network of about 80 stations is quite good for following how methane is roughly changing globally. But it’s not enough to give us information where the sources of methane are.”

Unlike carbon dioxide, methane emissions are more elusive, explains Dr. Sergio Noce, a researcher at the Euro-Mediterranean Center on Climate Change and contributor to the Global Carbon Project. “The Intergovernmental Panel on Climate Change tells us that uncertainty about CO2 emissions is lower than that of methane, probably because we know more about where CO2 is produced, and the observation network is much more developed. For methane, there is no globally accurate data on production activities, and sampling is not equally distributed […]. We know a lot about some countries and very little or nothing about others.”

“You really need global coverage, and that’s where satellite observations come in,” says Dr. Aben. “Measurements are challenging – once emitted, methane blends into the air and travels. So, in a location, you only see an average methane concentration, but the methane you measure might also come from elsewhere. We look at variations of these concentrations across the world and try to pinpoint and estimate the emissions.” But the TROPOspheric Monitoring Instrument (TROPOMI) can provide a much finer view of emissions, collecting data off small areas of 5 by 7.5km and providing as much as 40 million observations daily. “For the first time, we have full global coverage and high-resolution observations,” says Dr. Aben.

Possibly the most important data needed for mitigation is knowing who the biggest emitters of methane, or super-emitters, are. As natural sources also put significant amounts of methane in the atmosphere, telling what is human-induced and what is natural is still difficult. “In some cases, you might have oil and gas facilities close to wetlands, so it is complicated to tell exactly how much methane is coming from where,” Dr. Aben explains. So determining the super emitters helps.

TROPOMI looks exactly for those super-emitters – point sources such as coal mines or leaks from oil and gas extraction. “We try to focus on the ones that really pop out and analyse that in more detail. We go for the low-hanging fruit,” says Dr. Aben. “We collaborate with other partners with smaller satellites who can measure methane at very fine scales.” After TROPOMI detects emissions at global levels, it provides the locations that stand out, and smaller satellites can zoom in on smaller areas to tell which infrastructure is responsible.

Kayrros, a European technology start-up, uses data from Copernicus Sentinel-5P, as well as in-situ data and artificial intelligence to monitor methane globally on their Methane Watch platform. They also focus on super emitters and provide data to energy companies, the public sector, and many more. “Companies want to understand their emissions in order to abide by regulations on mitigation and methane levels,” says Antoine Rostand, founder and president of Kayrros. The company will also work with the International Energy Forum, the world’s largest energy organisation, to develop a measurement methodology for methane that would allow the energy sector to track methane hotspots more accurately and set better mitigation goals as part of their plans to meet the Paris Agreement goals.

Improving satellite observations and reducing uncertainty will help push methane mitigation, which is still in its early days. “ We still have to filter the data a lot – we can only say something about methane emissions if we don’t have interference from clouds. But with plans for new satellites and other smaller ones planned for higher resolution, we will see that in time these instruments will improve their measurements,” says Dr. Aben.

Despite observations, 2020’s higher concentrations of methane remain contentious. “We don’t really know the explanation,” says Dr. Frederic Chevallier, a scientist at the Climate and Environmental Sciences Laboratory in Gif-sur-Yvette, France, who says it’s hard to attribute the increase in concentrations to a single factor. How natural sources of methane react to climate change also requires more research to see if changes in rainfall and temperature could trigger higher releases of methane. “Some studies show that with temperature increases, wetlands release more methane,” says Dr. Aben.

Looking a bit further back in time, though, it does not seem that natural sources of methane have emitted much more above the 2000-2006 average, says the Global Carbon Project. On the other hand, emissions from agriculture, boosted by increased red meat consumption, rose by about 12 per cent in 2017, while fossil fuels’ contribution of methane increased by 17 per cent.

Reducing methane emissions in oil and gas is, at least for now, more straightforward than convincing people to start eating less meat. The extractive industry has a range of new technologies to replace old infrastructure, reduce leaks and recover methane, so they need data to know where they need to take action. Production facilities can use satellite observations to spot and address leaks they might be unaware of, which in the end saves them money. “But they are still reluctant to take significant action until regulation on methane becomes clearer,” explains Antoine Rostand at Kayross. When it comes to livestock though, things are more complex – mitigation strategies look at changing the diet of ruminants and improving how agro-industrial waste is handled. Some solutions include anaerobic digestion to capture methane from manure or feeding seaweed to cattle, which researchers found to reduce by 82 per cent of the methane they produce.

Measuring methane remains critical for pushing change across methane-rich industries, especially as 40 per cent of emissions could be mitigated at no extra cost, according to estimates from the International Energy Agency. The latest initiative from the United Nations and the EU Commission is an International Methane Emissions Observatory that aims to improve methane monitoring by creating a more complete picture of emissions – combining company reporting, satellite data, and scientific research. “People realise that they can do something with these measurements,” says Dr. Aben. “It’s slowly starting, and it will take a while, but it is clear things will pick up.”