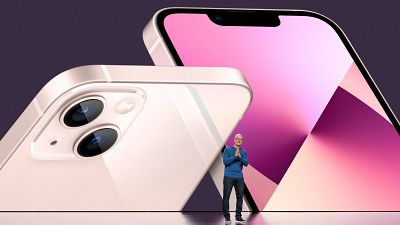 Millions of new iPhone 13s will be wending their way to excited customers this week, with the new model’s release on Friday.

Its new and improved features include a smaller carbon footprint: the iPhone 13 represents 64kg CO2e in greenhouse gases compared to 72kg CO2e for the equivalent iPhone 12.

But trading in your old smartphone for the newest model is the worst thing you could do. According to Apple’s own metrics, 81 per cent of the phone’s lifecycle carbon emissions are released during production.

The energy required to mine the rare materials for iPhones is huge. According to one report, “buying a new phone takes as much energy as recharging and operating a smartphone for an entire decade.”

Resisting the urge to own the latest iPhone won’t reverse emissions for the products hitting the shelves on Friday, but it will help to limit how many phones are made in the future.

With around 211 million smartphones sold in the EU annually, each lasting on average 3 years before they are replaced, battling the forces of ‘planned obsolescence’ is crucial.

And saving energy isn’t the only reason to vote with your purse. Mining the precious minerals, like cobalt, used in smartphone components often involves questionable labour practices.

Last year Apple, along with Google, Dell, Microsoft, and Tesla, was named as a defendant in a lawsuit filed on behalf of parents and children from the Democratic Republic of Congo, where more than half of the world’s cobalt comes from.

The companies deny the use of child labour, but given the size of Apple’s supply chain, you can’t be sure exactly who made your iPhone.

Sustainable alternatives to an iPhone

Given the ubiquity of smartphones and their assorted Apps in our lives - accelerated by the COVID-19 pandemic - it’s hard to know what the alternatives are to constant upgrading.

One phone comes head and shoulders above the others by almost all important measures, however.

Fairphone, launched by a Dutch social enterprise in 2012, is leading the way on supply chain transparency, with the company mapping out which manufacturers, smelters and refineries have shaped its aptly named devices.

The Fairphone tops the ethical rankings of the UK’s leading alternative consumer organisation, the Ethical Consumer, which also praises the company for including a screwdriver tool, enabling us to replace any broken parts. A far cry from Apple’s sealed-off technology.

Buying second-hand is of course preferable too, and recycling your phone when you really are finished with it is an important step in the process.

Going back to basics with a ‘feature phone’ could be an option as well, especially if you’re getting all your smart needs from a laptop or computer, and so can avoid doubling up on the energy usage.

If we’ve convinced you that buying the 13th iPhone iteration is not the best call, but you’ve already pre-ordered one, it’s not too late to cancel.

Apple’s support page has instructions for how to do this on different devices, and all it takes is a few clicks.

You can also send the phone back after it has arrived, with 14 days to indicate an ‘intent’ to do this, and a further 14 days to follow through on the return.