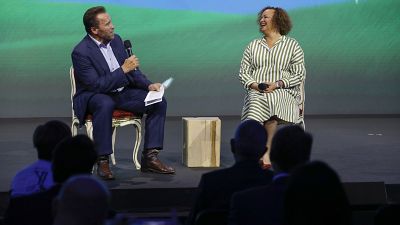 As the world's largest technology company - and, as of January this year, the most valuable company on the planet - Apple's impact on our lives is vast and wide-reaching. For this reason, says the company's VP of Environment, Policy and Social Initiatives, it has a responsibility to be a leader when it comes to climate change.

In a rare interview, Lisa Jackson sat down with us to talk about Apple's sustainability plans. Formerly the head of the US Environmental Protection Agency (EPA) under President Barack Obama, Jackson now reports directly to CEO Tim Cook, helping to shape and implement the company's green policies.

Over the last decade, Apple has made significant steps in the environmental sector. In 2012 it committed to shift to 100 per cent renewable energy - and by 2013 its data centres were running exclusively on clean power.

A few years later, the company's global operations were 93 per cent run on renewable energy - leading to praise from groups like Greenpeace, who said Apple "has helped set a new bar for the industry."

A year ago came the company's biggest eco announcement. Apple revealed plans to become entirely carbon neutral by 2030. This goal includes the full business, from its manufacturing supply chain to product life cycle.

"We lead by example," says Jackson, "we've demonstrated that a company as big and as far-reaching as ours can go carbon neutral."

This has had a knock-on effect for the companies Apple works with too; according to Jackson, over 110 suppliers have "come along on the journey to clean energy and carbon neutrality," she explains.

"The reason that they're willing to do that is they know Apple as a company has the experience and has done it. And we've promised to be there alongside them, with the know-how - and sometimes financing - to ensure that the change over to clean energy is good for their business."

It's not just clean energy on Jackson's radar at Apple. Part of becoming carbon neutral is also about improving the lifecycle of products and moving to a closed-loop system.

E-waste is one of the fastest-growing environmental problems we are facing. Part of the issue is how difficult electrical items are to recycle, leaving us with mounting piles of tech waste to deal with.

Many tech companies, including Apple, have been accused of deliberately designing their products to fail or malfunction after a limited time, thereby strong-arming consumers into buying replacements. This is known as "planned obsolescence" and it can make devices nearly impossible to fix.

However, legislation is being introduced in places like the UK which will require manufacturers to make repairs easier.

This is all part of 'closing the loop', an approach known as the 'circular economy' which explores the full potential of a resource through recycling and reuse systems. Apple is already looking at how to adopt this model, according to Jackson.

"We're really proud of the fact that Apple has been investing in the r&d [research and design] necessary to really enable a circular economy, not just in Europe but around the world," she says.

"The best way we found for recycling is to separate the components so that you can remove the materials and get them back into the supply chain. It requires innovation. It requires r&d. It requires investment," explains Jackson.

"The circular economy is a challenge we at Apple have decided to meet head-on, and we decided to lead from the front of the pack."

Child labour and exploitation in the mining industry

A criticism still facing tech companies around the world, particularly Apple given its size and status, is over the supply chains used.

Though, as Jackson says, the company is working to recycle its devices and reuse the components that are pulled out - this process is still far from circular. Products like smartphones and laptops still rely heavily on precious minerals like cobalt - materials that need to be extracted from the ground, often using questionable labour practices.

More than half of the world's cobalt comes from the Democratic Republic of Congo, and around 20 per cent of the DRC's cobalt is sourced from 'artisanal' mines. Artisanal mining is where workers are not officially employed by a company, instead working independently with their own tools and resources.

This style of mining is considered to be deeply dangerous, both for planet and the workers themselves. Miners are much more likely to be exposed to toxic chemicals like mercury and cyanide, which have been known to end up in waterways harming the local ecosystem and wider community too.

Even more alarming is the pervasiveness of child labour in these types of mines, with over 40,000 children working in southern DRC alone, according to a recent estimate by UNICEF.

Last year Apple, along with Google, Dell, Microsoft, and Tesla, was named as a defendant in a lawsuit filed on behalf of parents and children from the DRC. The five named companies have all sought the dismissal of the class-action suit, condemning the use of child labour while arguing that none of the defendants own cobalt mines, nor can identify the exact source of the materials they use.

The case is still ongoing, but Apple earlier this year released a report on conflict minerals, outlining the company's "commitment to responsible sourcing."

The report highlights that Apple does not directly "purchase or procure virgin raw minerals from mine sites", while simultaneously working to "use only recycled and renewable minerals and materials in its products and packaging."

Jackson echoes this sentiment when asked directly about the use of materials from the DRC and questions over labour practices.

"We've been investing in our supplier responsibility programme," she says, "which has been awarded and recognised in Europe and by the UN and others as leading in terms of looking for ethical labour and environmental practices around the globe.

"But Apple wants to go further than that, and be the corporate leader - not just in the sourcing of material, but in the recycling and reuse of material. Because these materials are precious, some of them are rare.

"Apple is happy to take on the leadership role here, but it's incumbent on all of us to enable material to be reused and recycled, because we only have one planet and one set of resources - so we all need to make the most efficient and practical use of them that we can," Jackson concludes.