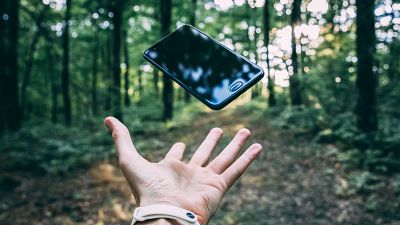 You might be dedicated to recycling and make a conscious effort to shop locally, but have you ever thought about the environmental impact of buying a new phone?

Around 56kg of raw materials are needed to create one 200g smartphone, not to mention the energy that is used in their production.

Euronews spoke to French company SMAAART on the sidelines of the Mobile World Congress about how buying refurbished phones can be good for both the environment and your pocket.

"By buying a reconditioned phone, you create 80% less waste than a new one," Jacqueline Pistoulet, the company's communications director, told Euronews.

What's more, the pre-owned models come with a much lower price tag.

Will the phone break after a couple of weeks?

Some people might be scared of buying a recycled phone for fear of it breaking, but companies like SMAAART are trying to combat that by offering a guarantee.

What about my personal data?

Mobile security has been a recurrent theme at the MWC, and many people store a lot of personal data on their phones, so this is a real concern.

SMAAART is licenced to remove data and devices are completely wiped before they are resold, said Pistoulet.

If the phone is beyond repair the company works with recycling experts to dispose of it responsibly.

Where do the old phones come from?

The French enterprise buys old company phones as well as running initiatives asking for people to donate their devices in exchange for money off a new one.

Are the phones covered in scratches and bumps?

SMAAART offers three categories of phone from A-C, depending on their cosmetic condition, and the price of the phones reflects this.

Grade A phones are in mint condition, while a grade C phone might have some bumps on the corners, but the fact that the phone will function well is always guaranteed.

"It's a circular economy," she said, "we want to have a positive impact on the environment and society."