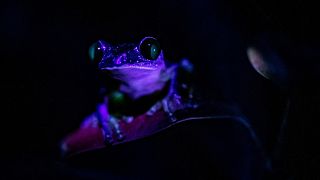 These stunning photos show how some animals glow vivid shades of red, blue and green under ultraviolet light.

The spectacle is known as bioluminescence and it occurs when higher-energy wavelengths of light are absorbed and sent back out at a lower wavelength. This is what makes parts of their bodies appear to glow.

There are hundreds of frequencies of light and different animals see them in different ways - even if they are invisible to the human eye.

“So although we may see an animal glowing brilliantly, their own kind, and even other species, may see this completely differently as they read a wavelength that our eyes can’t perceive.”

Despite leading efforts to conserve some of the world’s rarest reptiles, amphibians, fishes and invertebrates for more than 30 years, he says he has never seen them in this way.

Why do these animals glow in the dark?

While bioluminescence is a common phenomenon in the animal kingdom, little is known about why it happens. But scientists have a few theories on what these glowing body parts could be for.

“Communication is everything in the animal world, and how a species presents itself visually is a big part of how they speak to friends and foes,” says Dr Garcia.

“For the chameleon, for example, fluorescent patterns potentially give them a secondary signalling system that is different to their well-known colour change communication.”

Males tend to have more scales on their heads than females which Dr Garcia says makes them “very attractive to the opposite sex”. When these scales glow, it emphasises the size of their head, making females draw in for a closer look.

Other theories include animals using their ability to glow to mark territory, camouflage to hide from predators or even that there is no function for it at all.

“Whatever the reason for these magnificent sights, they’re fantastic to document and share with others,” Dr Garcia concludes.

“We hope these stunning images will further engage people on the importance of protecting the unique environment we share with fascinating species of plants and animals.”