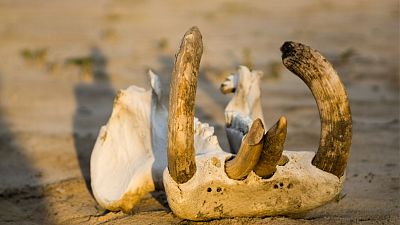 Fragments of hippo remains have been found by archaelogists excavating the Arabian desert   -   Copyright  Canva
By Shannon McDonagh  •  Updated: 08/09/2021

Scientists have discovered the ancient bones of a hippopotamus in the Arabian Peninsula, proving the dry land was once lush, green, and full of biodiversity.

Sediment samples show remains from a number of animals that would have needed large bodies of water and grassland to inhabit the area.

The remains were found alongside stone tools that were first used by humans up to 400,000 years ago in the Nefud Desert, along the north of the peninsula.

What is the Arabian Peninsula and why is this important?

The Arabian Peninsula is the world’s largest, spanning over 3 million km. It includes Yemen, Qatar, Saudi Arabia, the UAE, Oman, Kuwait, and parts of Iraq and Jordan.

Little has been explored up until this point about the historical role the Arabian Peninsula played in the migration of the world’s earliest humans and animals.

Scientists regard it as a “blank spot” for understanding the existence of early life, hence why this decade-long period of excavation has presented some marvel-worthy findings.

Satellite images of colour patterns in the desert drove the team’s belief that there were important archaeological remains present beside what were once ancient lakes.

“Arabia has not been part of the story of early human migration because so little work was done there before,” says study co-author Michael Petraglia, a paleolithic archaeologist at the Max Planck Institute for the Science of Human History in Jena, Germany.

How did the hippopotamus end up here?

We now know that these same desert regions were once intermittently rich in vegetation that attracted large animals - like the hippopotamus - migrating out of Africa to linger in lakes.

The world’s third-largest land mammal would have likely traversed upwards from its home in the bottom half of the African continent, through Sudan and Egypt, before reaching flowing rivers, lakes surrounded by grasslands and savannah.

This also made the stretch of land appealing to early humans as a historic settlement. During these windows of hospitable climate, early humans and animals moved from northeast Africa into the Arabian Peninsula, researchers say.

Our earliest understanding until this point was how the region played a central role in the formation of Islam, acting as a travel pathway to the holy cities of Mecca and Medina since 610 AD.

“What this research group has done is really exquisitely combine archaeology and climate records going back 400,000 years to show that early humans moved across this landscape when the climate changed,” says paleoanthropologist Rick Potts from Smithsonian’s National Museum of Natural History.

This could explain other discoveries of hippos in ancient Asia

In 2003, researchers at Punjab University, India, found a hippopotamus tooth in fossiliferous silt along the rivers of Madhya Pradesh.

This puzzling discovery led them to believe the sample was 5.9 million to 9,000 years old. Dating technology more accurately placed this at 15-16,000 years, making it India’s last known hippo.

Newfound knowledge of the hippo’s presence in the Arabian Peninsula opens the door to a host of other research about how the species progressed through Asia and the motivations of the animal for doing so.