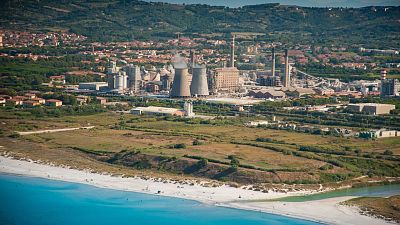 What Vogue Italia highlighted on its cover vs. what people living in Rosignano see   -   Copyright  Canva
By Shannon McDonagh  •  Updated: 15/09/2021

Vogue Italia is facing criticism for cropping a feature of the Tuscan coast that has caused decades of environmental problems for locals.

The front cover of the magazine's September issue pictures the flawless white beaches of Rosignano Solvay, Tuscany, in an area often referred to as the 'Maldives of Italy'.

Based off this image alone, it would be impossible to know that the shoreline is also home to a chemical plant guilty of directly disposing waste products into the nearby sea, according to Vice World News.

Why is this a problem?

Initial observations suggest there is nothing wrong with the cover. It depicts fully clothed models walking in and out of the powder-blue water in different directions and matches the calibre of Vogue’s thousands of international high fashion shoots.

"Water is the symbol par excellence of regeneration, redemption, and a return to life,” says Massimo Vitali, the legendary Italian photographer responsible for the image.

An 180-degree camera turn provides a less tranquil set of visuals however.

A chemical plant built by Belgium-based company Solvay has been an undeniable presence on Rosignano’s coast since 1913.

Solvay has been around long enough to give the area its namesake and has built a number of infrastructure developments in the area, such as schools.

Many toxic chemicals in the mix, such as mercury, arsenic, cadmium, chromium, lead and ammonia, are incredibly harmful to humans and animals.

Other than being unpleasant to look at in an eerie, Simpsons-esque way, it is responsible for disposing of waste chemical products directly into the Ligurian sea. Many toxic chemicals in the mix, such as mercury, arsenic, cadmium, chromium, lead and ammonia, are incredibly harmful to humans and animals.

The sand’s famous bright white colour that makes the beach so popular is down to the high quantities of limestone ash residue.

Vice reports that in 2017, fish were washing up on the shoreline with abnormal levels of ammonia in their bodies. Chemical testing of the water also found “several abnormalities in the concentration of mercury and hexachlorobenzene in the water bodies.”

The regulator responsible for evaluating the water’s safety continues to insist that the water is safe to swim in and compliant with its rules, despite regularly testing positive for unsafe levels of toxins.

The magazine released an updated explanation of the cover image that argued it was intended to “raise awareness” about the environmental problems Rosignano Solvay represents.

“In no way was it intended to glorify a polluted beach and the title could have been clearer in addressing the complex and layered meaning behind the image in-book,” said the company.

It was intended to “raise awareness” about the environmental problems Rosignano Solvay represents.

“Sustainability is a key pillar of everything we do, and Vogue Italia will continue to be dedicated to raising awareness about these important issues.”

Additional comment was also provided by the shot’s photographer.

“The supernatural beauty of this piece of Tuscan coast is for me a constant wake up call about the absurdity we are all living: nothing is what it seems to be, and it is our job as artists to not forget this important truth,” explains Vitali.

Big companies have to take responsibility

Chemical contamination is described by experts as a “major environmental concern in European waters.”

Though the majority of water in Europe is held to high regulatory standards, parts of France, Switzerland, Germany, the Netherlands, and Belgium are considered high-risk for chronic water contamination for a myriad of reasons related to corporate and commercial activity.

Francesco Berti, a member of the Chamber of Deputies, represents Italy’s populist M5S party who first came into power on an economically-right, socially-left wing mandate. Central to this was an environmental agenda that tackles the impact big businesses have on our environment.

He expressed his frustrations about the Vogue Italia cover in a Facebook post calling on big businesses to “take responsibility”.

“Today I'm going to write to Vogue asking if they're aware of the environmental disaster that frames their ′’beauty’. Because big companies have to take responsibility for the ecological transition,” he says.

Vogue Italia, which has over 10 million followers across its social platforms, is yet to respond.