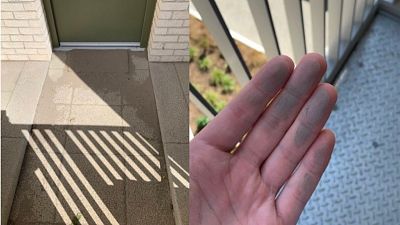 One London neighbourhood has been plagued by thick coatings of dust.   -   Copyright  Image courtesy of Stop The Silvertown Dust
By Florence Wildblood  •  Updated: 29/08/2021

In parts of Newham, one of London’s poorest boroughs, residents are suffering the fallout from rapid redevelopment and bad planning.

Situated on the eastern edge of London, adjacent to the river Thames, Silvertown has long been an industrial area. It takes its name from S. W. Silver, who established a rubber factory there in the 1850s. In more recent years it has housed chemical plants, the city’s principal docklands, and the largest sugar refinery in Europe.

The 2000s ushered in a new era for Silvertown – with billions of pounds in property investment and the construction of thousands of new homes. It has been regenerated and redeveloped into a residential area.

But the transition has not been a smooth one. As affordable housing jostles for space alongside still-operating factories and industrial sites, Silvertown locals – both new and longstanding – are paying the price.

The wider borough of Newham, which extends up to Stratford and Forest Gate, has been found to have the ‘most toxic air in the UK’. Breathing it in has been likened to smoking 159 cigarettes a year, with seven out of every 100 deaths in the area attributable to poor air quality. But in Silvertown specifically, toxic fumes come accompanied by dust and sand pollution.

In the area surrounding West Silvertown DLR station, roads and pavements are periodically coated with thick layers of sand. Dust settles on doorsteps, windows and just about any other flat, external surface. Otherwise, it simply hangs in the air – presenting a serious risk to human health.

This is a health hazard

“Since I moved here in 2019, I have had two asthma attacks due to the dust,” a resident of Copeland Court, just off the North Woolwich Road, tells Ours to Save.

“I’ve since been given an extra asthma pump to help me breathe. I can only open my windows when it rains, and this is causing havoc in my health.”

I can only open my windows when it rains, and this is causing havoc in my health.

The World Meteorological Organisation lists skin and eye irritation, asthma, tracheitis, pneumonia, allergic rhinitis and silicosis as impacts of exposure to airborne dust. Some particularly fine particles are even able to make it into the bloodstream, thus damaging internal organs and causing cardiovascular problems.

Silvertown’s new homes are well-insulated, and therefore heat up quickly without fresh air. But residents report dust blowing inside their homes if they try to open windows for ventilation.

“I have to use nets on my windows to try and stop some of the dust coming into our home, whilst trying to get fresh air,” says a resident who has lived on Boxley Street for the past 40 years.

During the COVID-19 lockdown, some households even opted to go and stay with friends and family outside the area. The alternative was being “sealed” inside, with a once-daily dose of dusty air outside.

Although many buildings have balconies, they were and remain virtually unusable - given the amount of dust they can accumulate in just a 24-hour period. Nearby Lyle Park, a short distance away from the source of the dust and sand, is no better.

Where is the dust coming from?

“The dust is from industrial sites located on Bradfield Road and Knights Road,” a spokesperson for Stop The Silvertown Dust tells Ours to Save. “These sites are just metres away from Lyle Park, children’s playgrounds, tennis facilities and thousands of residential homes.

“On these industrial sites, there are large mounts of uncovered dirt, which are blown around the area 24/7 without any proper measures to protect residents. In addition, these businesses use numerous HGVs [large goods vehicles] each day, resulting in the roads and pathways getting regularly covered in dust, sand and mud.”

Stop The Silvertown Dust was formed in July 2020, just as Lockdown 1 – which laid bare disparities in access to green space across the UK – was ending. The community-led group is lobbying for safer living conditions in Silvertown. This will, its spokesperson explains, come only from a more rational approach to planning. As things stand, local authorities are trying to have their cake and eat it too.

Proper protections are not in place for residents.

“We are astonished that thousands of residential homes have been approved, with thousands more to come, near such polluting heavy industrial businesses. Simply put, proper protections are not in place for residents.”

“The current mitigation measures, which look good on paper, are not working. Newham Council and the Greater London Authority (GLA) have approved such homes but also continue to approve temporary planning permissions for these industrial businesses,” they continue.

“The council needs to make a decision and take a stand. How can heavy industry and thousands of residential homes go hand-in-hand on the same streets?”

A tale of environmental inequality

Stop The Silvertown Dust say they have reported the issue to Newham Council, local MPs, the GLA and the Environment Agency – but feel their complaints are falling down a rabbit-hole.

“We are simply not being listened to, which is frustrating because we can all see the dust and effects it has on residents and the local area. Conversations may be happening, but we do not see results!”

When asked for comment, Councillor Steve Brayshaw said, “I met with constituents this month, including reps from the dust campaign, and we agreed a series of actions for the council to take, which I have communicated to the relevant cabinet leads and we are working to improve the situation.

“I am a resident as well as a representative and recognise the dust problem. The concrete crushing plants are needed where we have development, but any close proximity to residential units causes these growing pains.”

We are simply not being listened to, which is frustrating because we can all see the dust and effects it has on residents.

He adds, “We hope to find a solution that improves the air quality for all of our residents.”

It is hard to imagine that dust and sand pollution would be this rife in a wealthier borough.

“While government officials were debating a plan of action, there would be an endless supply of street cleaners to mitigate the impact to residents,” notes the Stop The Silvertown Dust spokesperson.

“However, because this is happening in the London Borough of Newham, it is somehow deemed acceptable and swept under a rug.”

It is hard to imagine that dust and sand pollution would be this rife in a wealthier borough.

At the end of last year, Ella Kissi-Debrah became the first person in the UK to have ‘air pollution’ listed as the cause of death on their death certificate. Ella was nine years old and living next to the South Circular in Lewisham when she died.

Across the river in Silvertown, schoolchildren are struggling with eye irritation and asthma, and at ever more risk of the longer-term impacts of dust exposure.

To avoid further tragedy, the time to act against toxic air is now.

This piece was first published by Ours to Save, a media platform dedicated to covering the climate crisis.