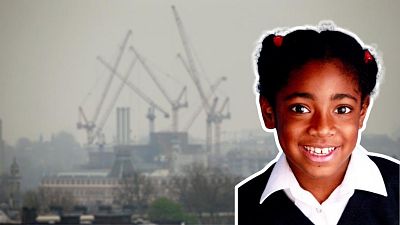 Nine-year-old Ella Adoo-Kissi-Debrah died in 2013, and a coroner recently rules air pollution as the cause of her death.   -   Copyright  AP Photo
The opinions expressed in this article are those of the author and do not represent in any way the editorial position of Euronews.
By Francisca Rockey  •  Updated: 04/01/2021

Last month, Ella Adoo-Kissi-Debrah became the first person to have air pollution listed as a cause of death, breaking new legal ground in the UK.

Ella and her family lived near South Circular Road in Lewisham, south-east London and developed life-threatening asthma. Children in the UK’s capital are 4.2 per cent more likely to be hospitalised due to exposure to high levels of nitrogen dioxide pollution, than elsewhere in the country.

It had never been explained to Ella’s family that air pollution could make your asthma worse and in 2013, the nine-year-old died after a three years battle with seizures.

A 2018 report by Prof Stephen Holgate found that air pollution levels at Catford monitoring station, a mile from Ella’s family home, exceeded legal EU limits in the three years prior to her death.

Now that air pollution has been recognised as a “significant contributing factor to the induction and exacerbation” of Ella’s asthma, the fight for environmental justice must continue as her legacy.

A post shared by We Are Gen Change (@wearegenchange)

Air pollution is a growing environmental concern and a major cause of premature death and disease. According to the World Health Organisation, air pollution takes 4.2 million lives per year. Breathing in poor quality air can harm the health of humans, animals, plants and infrastructure.

This is a global public health crisis that very few know much about.

We are all exposed to air pollution, but some of us more than others. Black people in London are more likely to be exposed to toxic air than white people. Transport is one of the key drivers of air pollution in the UK, because so many of us are dependent on cars, but there is a need for cleaner and more healthier modes of transport. Most pollution in London is caused specifically by road transport, domestic and commercial heating systems, with particular matter and nitrogen dioxide being the two most concerning pollutants in the capital.

Southwark, a borough containing a black population of 17.37 per cent*, nitrogen dioxide levels have reached 90.8* micrograms per cubic metre of air.

World Health Organisation data shows that 9 out of 10 people breathe air that exceeds their guideline limits. This limit is 40 micrograms of nitrogen dioxide per cubic metre of air; Southwark is more than double this.

Long-term exposure to high levels of air pollution can increase the risk of strokes, heart disease, lung cancer and both chronic and acute respiratory diseases including asthma.

Air pollution lurks around us, preying on children, elderly, poor, black and brown people who are more susceptible to the adverse health outcomes associated with air pollution.

But why are black people more exposed to toxic air? Environmental racism.

Systemic injustices translate into environmental and socio-economic inequalities. It is not coincidental that inner city areas, heavily populated by black people are also found to be subject to long term exposure to pollutants.

As a black geographer, I feel a strong sense of responsibility to inform my community on matters concerning the environment. It is important to understand the intersectionality between environmental issues, racism and the need for environmental justice.

Environmental racism is when neighbourhoods, densely populated by black and brown people, are burdened with a disproportionate number of environmental hazards such as toxic waste and other sources of environmental pollution that lower the quality of life.

Communities should not be forced to deal with more pollution because they belong to a certain race or income bracket. The concept of environmental justice was developed following the civil rights movement in the 1960s, where individuals sought to address the inequity of environmental protection in their communities.

There is a relationship between socio-economic status and environmental harm, it was found by WHO that black people are likely to live in more deprived areas linked to illegal levels of air pollution. This is while white and wealthier areas have more green spaces and black communities have little to no protection to the industries around them and things could get worse.

The burden of environmental degradation falls unfairly on communities of colour and with levels of pollution and consumption rising yearly, climate change is set to increase the impacts of air pollution on poor, black, brown and minority ethnic communities.

Organisations like BreatheLife and Chokedup work with communities to reduce the impact of air pollution on our health and climate by raising awareness to the invisible killer and its impacts.

People can be exposed to air pollution in both indoor and outdoor environments so there’s a need to reduce emissions from their source to prevent more people falling victim to the silent killer.