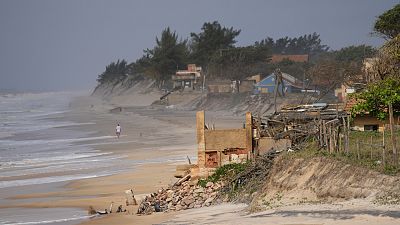 Decades ago, Julia Maria de Assis thought someday she would take over the hotel her father had begun building in Atafona, a seaside district in northern Rio de Janeiro state in Brazil.

But the very attraction that drew the tourists to Atafona – the sea – became its foe.

Advancing water put the hotel's construction on hold until, 13 years ago, the ocean's force finally tore it down.

Almost 500 other buildings have succumbed, too.

As a result of human action, over the past half-century, the Atlantic Ocean has been slowly and relentlessly consuming Atafona, part of the Sao Joao da Barra municipality that is 155 miles from Rio de Janeiro's capital and home to 36,000 people.

Due to climate change, there is little hope for a solution. Instead, Atafona will slip into the sea.

The Paraiba do Sul River, which originates in neighbouring Sao Paulo state, brings sediment and sand to Atafona where it empties into the Atlantic Ocean.

Its flow was mostly diverted in the 1950′s to provide water to the growing capital, which weakened Atafona's natural barrier to the ocean, said Pedro de Araujo, materials technology professor at the Fluminense Federal Institute.

The sea's average position moves some five metres inland every year, according to the professor.

Specialists have evaluated possible solutions, such as the construction of artificial barriers or depositing vast quantities of sand, but none appear effective enough to halt the ocean's advance.