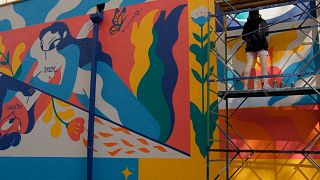 Another day or two of work, and this huge selfie the size of a four-storey building will be completed. Street artist Anetta Lukjanova came to the street art festival Stenograffia from Finland. She often screenshots stories of her friends to get inspiration for her artworks, such as this one.

That's how she combines quick the medium of a phone photo and slow medium of painting with oil or acrylic paints.

The festival highlights its legal character, getting support of the local authorities and official approval for the surfaces to use.

This helps to sustain the legacy of the festival works which indeed live for many years after and become tourist attractions later on. For some artists the festival became the springboard to start the street art career.

This year, in addition to traditional murals, an artistic wire fence, an installation in the form of an indicator of the health of architectural buildings and painted kiosks, appeared in the city. The festival traditionally starts in July and will last until the end of August. Seven more works are yet to appear.