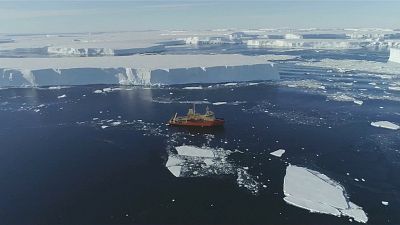 In this episode of Climate Now, we take a closer look at melting ice and rising sea levels, to understand what's really happening at the poles as the planet warms.

First though, a roundup of the latest climate data for October from the Copernicus Climate Change Service.

Over Europe as a whole, it was the warmest October on record, with temperatures 1.6 degrees Celsius above the 1981-2010 average.

Western Europe was wetter and very stormy, with Storm Alex sweeping across the region, causing destruction, flooding, and claiming lives in France, Italy, Austria, Poland and the Czech Republic.

The climate data in the graphic below reflects the effects of the storm, with the areas in blue showing more rainfall than average in October.

Looking at the soil moisture in the graphic below, we can also see that these areas in blue are wetter than average.

However, in the Caucasus, Ukraine and western Russia October was drier than average.

The data in the graphic below shows that October was also a record-breaking low in Arctic sea ice extent.

The area in red shows where the sea ice should be forming. However, it is mostly not there.

The line in the middle shows what is known as the 'Northeast Passage' - in theory, a shipping route between Asia and Europe, that has been ice-free for the past four months.

The impact of melting ice in the Arctic and Antarctica

It is a phenomenon that is accelerating. Levels have been measured precisely from space using satellites since 1993, and are rising by an average of 3.3 millimeters per year. However, the rate in the past five years has been 5 millimeters per year. The majority of the rise is due to melting ice, while around a third is due to thermal expansion of the oceans as the water warms.

Ice is disappearing from both the Antarctic and Greenland, and the big question is how fast the glaciers are melting and what it means for sea levels.

Professor of dynamics of the climate system at Potsdam Institute for Climate Impact Research, Anders Levermann, has simulated how sea levels will rise as Antarctica melts.

His concerning projections show that the one degree (1°C) of global warming we already have in the Earth system will eventually raise sea levels by two and a half metres. His calculations don't put a time scale on that projection, but it's likely to be hundreds of years from now.

Antarctica is also home to the huge Thwaites Glacier, which scientists are closely monitoring, fearing it will soon collapse, which could result in a sudden sea-level rise of over 60 centimetres.

Dr Robert Larter is a marine geophysicist at British Antarctic Survey, and explained to Euronews how a flow of warmer, saline water from the distant ocean is now penetrating beneath the ice as it floats out onto the sea surface. The effect is that the glacier is becoming more unstable.

"The warm water is getting underneath this floating extension and melting that. And that's incredibly important because the floating part, the ice shelf, restricts the flow of the inland ice. When that starts to lose its integrity, the inland ice flows faster. So you put more ice from upstream into the sea," he explained.

In Greenland, ice calving and surface melt has accelerated in the last 20 years, with changes being provoked by changes in the weather, according to Dr Ruth Mottram from the Danish Meteorological Institute.

"In the wintertime, you know, we're seeing a lot of snowfall, which is very normal in Greenland. We're seeing years with high snowfall and low snowfall. So there's lots of variability. But we're also seeing more rain falling. So although the same amount of snow and rain altogether is falling, more of it is falling as rain than snow. So there's a lot of different processes that are involved," she said.

For coastal cities around the world, the impact will be devastating, according to Professor Levermann: "If we reach four degrees by the end of the century, a business as usual scenario, this means a global sea level rise of more than 10 meters in the very long term. And that means that we will have to abandon coastal cities like New York, New Orleans, Rotterdam and Hamburg," he said.

Special report: What's really happening in the Arctic and Siberia?