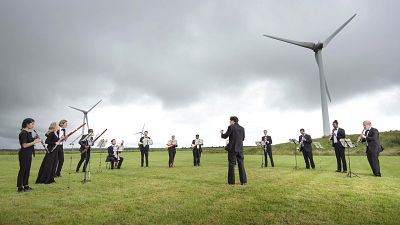 An orchestra has given a performance in the middle of the UK’s first commercial wind farm to mark Earth Overshoot Day. The musical activism group performed a piece by Mozart in the shadow of wind turbines in Delabole, Cornwall.

The day marks the point in the year when humanity’s demand on nature exceeds what Earth’s ecosystems can renew. This year it falls on the 22nd August just under two-thirds of the way into the year.

Orchestra for the Earth wants the call to action to highlight young people’s desire for the government to back a greener economy in the UK.

“I’m frightened for the future of our planet and the career prospects for my generation coming out of this pandemic,” said Lorrain Hart, climate activist and member of Orchestra for the Earth. “We are here today to urge the government to act.”

Half of Brits between the ages of 18 and 34 want a job in the green economy, according to a survey carried out by Good Energy. The renewable energy company found that just six per cent of the people they asked would like a career in the fossil fuel industry.

“The idea of this was to give that voice, was to say, actually, there are a load of young people out there who would like jobs in the green economy. They see the green economy as being important,” Juliet Davenport, founder of Good Energy tells Euronews Living. “They want governments to do something about climate change.

“It's also an orchestra, campaigning around climate and the environment. It seems to fit very well with what we're trying to say, which is that there are jobs even in the music industry, they can start to inspire people to think about the climate.”

Two thirds also wanted the UK government to do more to fight the climate crisis but only 29 per cent understood what Earth Overshoot Day was.

“So obviously, the ask, for us has been trying to ask the government to really think about how it builds back and where, because it's going to put a lot of money into a lot of sectors. Where it puts that money will make a massive difference,” adds Davenport.

The UK Government recently announced a £40 million Green Recovery Challenge Fund for charities and environmental organisations to take on projects to restore nature and tackle climate change. It says that it will create up to 3,000 green jobs and protect 2,000 more.

But Davenport believes that green jobs need to be created in all sectors, not just ones that are already conscious of the climate crisis.

The good news though?#EarthOvershootDay has been pushed back by 3 weeks this year, as the COVID-19 pandemic has forced fewer resources to be used.

Can we #movethedate for good though?#BuildBackBetterpic.twitter.com/OTFe8WqXxB

“I think it's not just about saying we're going to create a new green sector. That's not the point. The point is to say, all the sectors are going to become greener and therefore all jobs can become greener within them.”

The Local Government Association (LGA) recently revealed that, with the right support, 700,000 jobs could be created in the low-carbon and renewable energy economy in the UK by 2030, rising to 1.18 million in 2050.

“The only way to deliver sustainable long-term growth is to ensure that that growth is part of a transition to a decarbonised economy,” the LGA said.