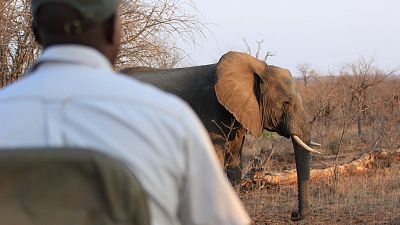 When COVID-19 was first declared a global pandemic in March 2020, the daily lives of millions around the world changed practically overnight.

For those working tirelessly to protect national parks and conservation areas, this presented huge challenges.

Visitor centres and tourist schemes that brought vital revenue had to be closed. Emergency wildlife incidents, such as poaching, were more difficult to prevent and investigate. Community education had to be stopped as limits were placed on who we could meet and where we could go.

In Africa, barely 20 per cent of countries believed they could continue with anything more than basic operations in protected and conserved areas (PCAs) for more than six months. While some saw positives from fewer visitors and reduced pollution, a vast majority reported that their capacity to cope with the pandemic was being impacted by a lack of funding.

So how are conservation efforts around the world coping more than a year into this global crisis?

The significant impacts on conservation and community

In March this year, IUCN released a series of studies detailing how conservation efforts had been severely impacted during the last 12 months. These studies found that job losses, reductions in anti-poaching patrols and rollbacks on environmental protections had taken their toll.

The brunt of the consequences of COVID-19 fell on those working to protect nature and biodiversity across Africa and Asia.

More than half of protected areas in Africa reported that they had had to stop or reduce their field patrols and anti-poaching efforts. A quarter of operations in Asia also had to reduce their conservation efforts.

The people protecting these at-risk animals and habitats have been hit hard by the pandemic too.

The people protecting these at-risk animals and habitats have been hit hard by the pandemic too. A survey of rangers across more than 60 countries found that one in four had seen their salary reduced or delayed and a fifth reported that they had lost their jobs due to COVID-19.

As with many environmental catastrophes, those on the front lines of the climate crisis have been worst affected. Rangers and communities in Central and South America, Africa and Asia experienced a bigger impact from the effects of the pandemic than their counterparts in Europe, North America and Oceania.

A ‘double-edged sword’ for the Black Mambas Anti-Poaching Unit

One of the conservation groups affected by the issues IUCN highlights is the Black Mambas Anti-Poaching Unit. They are an all-female group of rangers in Balule Nature Reserve, South Africa, that use non-violent methods to prevent poaching.

“On the 26th March last year, the landscape was cleaned out, the tourists had to leave,” CEO Craig Spencer told Euronews Green.

“A lot of the lodges had to pay everybody back, close their doors and they sent all their workers home, both skilled labour and unskilled labour.”

He explains that it meant those who normally looked after the organisation’s 10,000 hectares of land across 14 lodges were now left without an income. The pandemic had called into question the eight years of investment this all-female group of anti-poaching rangers had put into their communities.

“Suddenly, you're watching that investment slip through your fingers. Within one month there were people sat there having to contemplate coming into the park, the very park that they grew up to love and poach to put food on the table,” he adds.

“That was a huge risk to us and to the park and of course the entire wildlife economy.”

To stop years of community outreach work from going to waste, the Black Mambas leaned on their position as role models. They identified the risk and worked with families in need to prevent poaching from becoming their only option. Members of the group helped with food rations, growing vegetable gardens and even supplied water to the communities where they work.

But, with fewer people allowed into the nature reserve, preventing poaching also became easier. Without people on the inside to filter information out to poachers, the team saw a dramatic drop in the number of rhinos being killed.

“It's like it's a double-edged sword, you know, it’s had its ups and its downs.”

Conservation needs to be a priority in COVID-19 recovery

Numerous experts have now pointed out the link between our destruction of nature and the potential for pandemics to occur on such a devastating scale.

The money needed to fund schemes that restore and conserve our natural environments is just a small fraction of what has been spent by governments around the world in the wake of COVID-19.

“Protected and conserved areas are an essential conservation strategy - they help ensure the long-term health of nature, people and livelihoods,” says Rachel Golden Kroner of Conservation International and lead author of one of the IUCN reports.

The NextGenerationEU recovery package has already proposed to commit 203 billion euros, 30 per cent of its total budget, toward green initiatives.

In Europe, the NextGenerationEU recovery package has already proposed to commit 203 billion euros, 30 per cent of its total budget, toward green initiatives. Of that, €10 billion will go towards building “natural capital and circular economy”.

Eight countries have earmarked money specifically to support, expand and connect PCAs. In Finland, for example, €13.1 million has been pledged by the state to rehabilitate nature sites and develop nature tourism.

“It’s encouraging to see the conservation of nature take a priority in some COVID-19 recovery efforts,” Golden Kroner says.

In order to build a sustainable future, any rollbacks of environmental protections need to be avoided and our recovery needs to take into consideration negative impacts on biodiversity.

“We cannot allow the current crisis to further jeopardise our natural environment.”