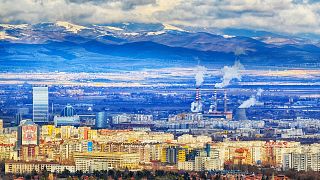 A group of citizens in Bulgaria are trying to take the authorities of Sofia to court over harmful levels of air pollution in the capital.

More than half of the city’s air quality monitoring stations recorded illegal levels of PM10 pollution more than 35 times over the course of 2020.

A law charity working with the citizens also says Sofia has failed to meet the legal air quality standards for PM10 for the last decade.

The European Union sets out limits on the level of pollutants in the air in order to protect the public from the harmful effects.

PM10 are inhalable particles of pollution that are generally 10 micrometers and smaller.

Sofia’s authorities have a plan to improve air quality in the city, but the six citizens, working with environmental organisation Za Zemiata and environmental law charity ClientEarth, argue it does not go far enough.

They say the plan won’t reduce levels of air pollution in the city to within legal limits by 2024, as has been promised by the authorities.

The legal challenge rests on the citizens’ assertion that the failure to adequately address illegal levels of air pollution is a violation of their right to breathe clean air.

“The residents of Sofia have been living with dirty air for more than 10 years and have been waiting for a bold plan that finally addresses this health crisis and reduces the thousands of premature deaths linked to polluted air,” said Ivaylo Hlebarov from Za Zemiata.

“Unfortunately, the Municipality of Sofia has once again failed to deliver this.

“Public resources should be used to tackle illegal levels of air pollution quickly and effectively, not wasted on obscure measures, with no tangible way to assess whether they actually work.”

According to the NGO European Public Health Alliance, Sofia has a higher proportion of residents using cars than in many other major European cities.

Its figures show there are nearly 0.8 cars per adult in the city, while the average for large EU cities is around 0.5.

The courts in Bulgaria have so far denied citizens the right to challenge authorities in court over pollution levels, something the group represented by ClientEarth says is in breach of European law.

ClientEarth lawyer Agnieszka Warso-Buchanan says, “When authorities fail to uphold their duty to protect people’s health, the law should enable people to exercise their right to hold authorities to account. But Bulgarian courts have time and again refused people this right. It’s time that this changes.”

They will now have to wait to see whether they can take the authorities to court, and if so a date for a hearing will be set.