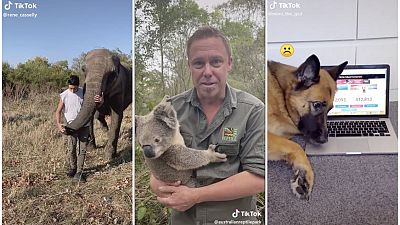 Once you use the social media platform for a little while, you’re likely to come across endless accounts dedicated to animals, the hashtag #animals has over 13 billion views. From videos of cute kittens to canine bloopers - animals are all over TikTok.

But what are the rules when it comes to using live creatures to entertain the platform’s 800 million active users? And is it ever ethical?

One of the best-known animal accounts on TikTok belongs to Rene Casselly, or ‘Elephant Boy’. He has over 1.5m followers on the platform and a further 223k on Instagram.

Casselly, in his early twenties, is the seventh generation in his family to work as an animal trainer, so has spent his life surrounded by elephants. He currently works with his family at Hungary’s National Circus, which has recently transformed into a safari park during the coronavirus pandemic.

A cursory glance at Casselly’s TikTok page shows you some extraordinary tricks. From dunking a basketball in the net as he’s lifted up by an elephant, to using an the creature’s enormous footstep to propel him several metres in the air off a see-saw - there’s no doubting Casselly’s animal training skills.

It’s easy to see why his videos perform so well on TikTok, as the platform’s algorithm rewards high-performing content by pushing it onto users’ homepage (or ‘For You’ page), regardless of whether you follow them or not. Casselly has over 19.5m likes on his videos, a clear testament to his popularity.

But is it fair? The elephants never appear to be distressed, but equally we never see the work which goes into their training either.

Jennifer White, spokesperson for PETA UK, has previously branded Casselly’s work as “seriously cruel” on social media, arguing that circus elephants are not skilled, but “broken from years of hardship and training.”

“Arguably, the best thing about social media is the endless scrolling through adorable animal content,” says White, “but social media platforms – including TikTok – are also a minefield of accounts that appear to be run by animal enthusiasts but actually promote exploitative attractions, such as photo ops with captive wild animals or elephant rides, which involve behind-the-scenes animal abuse.

“Some social media platforms are getting wise to this abuse. For example, on Instagram, a message warning about animal exploitation and abuse pops up whenever someone searches for hashtags such as #TigerSelfie or #BlackJaguarWhiteTiger.”

PETA has even compiled a guide to spotting deceptive or exploitative animal content on social media.

Casselly has not responded to euronews Living’s request for comment, but he previously told Life Death Prizes in 2017, “[the elephants] are like my family and my pets as well. I grew up with them. I don’t know anything else, they are like my brothers and my sisters.

“I have a really close relationship with them and I think that’s what allows me to do the stunts that I do.”

Extracting venom from snakes is a popular theme on TikTok

If you’ve spent enough time on TikTok, it’s highly likely you will have come across the Australian Reptile Park's account. With only a fraction fewer followers than Casselly, at 1.4m, the park is much-loved on the platform.

The Australian Reptile Park is about an hour outside of Sydney, with one of the largest reptile collections in Australia and several species of Australian mammals too. The park’s account took off after it began to showcase its processes for extracting (or ‘milking’) venom from snakes, to use in antivenom - the life-saving medication needed to treat fatal bites from spiders or snakes. It’s one of the only places in the world producing antivenom for many of the snakes and spiders it houses, and is credited with saving thousands of lives each year.

The park only began using TikTok a year ago, after realising there were no other Australian wildlife sanctuaries producing content on the platform.

The account took off after it began to showcase its processes for extracting (or ‘milking’) venom from snakes.

“We are always on the lookout for new innovations in social media, and we saw how quickly TikTok was starting to take over,” says Rebecca Plumridge who has run the park’s social media for the last three years.

It was a video of a snake being ‘milked’ that first catapulted the account to fame. “I still remember uploading the first few videos, hashtagging them, and checking them constantly to see how they were doing. I knew we had the right content and timing, it was just a matter of time before something went crazy.

Plumridge believes the success of the account is largely down to the nature of the content. “We were the first to post content of our kind on the platform that a lot of people had never seen before, particularly international audiences who had never seen a snake be milked before!” she explains, “and our work is important because we are educational, fun, and bringing awareness to our incredible wildlife and helping people understand how they can help.”

The account is used for entertainment, but has a real commitment to education too, about the work the park does, as well as the importance of wildlife conservation. During the Australian bushfires earlier this year, the park’s TikTok page was used to help raise money for its sister charity, Aussie Ark, along with profiling the work its keepers were doing to support wild animals struggling amid the tragedy.

Throughout her time running social media for the reptile park, Plumridge has yet to come across any criticism - perhaps a reflection on the work they do on animal welfare.

“We look after our animals to an incredibly high standard, we love and care for our animals so deeply and I think that’s sincerely reflected in our content,” she says. “People love seeing animals, especially when they can see how loved they are by the keepers!

Reptiles are all extremely well cared for and never put in any uncomfortable situations for a video. You will never see us participating in those sorts of videos.

“Our work is very different to the above mentioned [accounts such as Casselly], our animals are in a wild, native bush setting and are all extremely well cared for and never put in any uncomfortable situations for a video. You will never see us participating in those sorts of videos.”

What about man’s best friend?

Away from wild animals though, TikTok - and social media more generally - is littered with dog content.

This is something which concerns PETA, explains White, not because every account is cruel, but because some content is normalising animal abuse, without viewers even realising.

Among the harmless videos, there are plenty of dogs dressed up or appearing to ‘grin’ - which is actually one of the ways dogs show fear. “These videos are dangerous – particularly for impressionable viewers, including TikTok's young users,” says White. “They normalise treating animals disrespectfully – even physically abusing them – and there's a risk of copycat behaviour by people who are desperate for publicity and attention, even the negative kind.”

But there are accounts, featuring animals, actively trying to educate people about these issues. Kratu, a rescue dog owned by Tess Eagle Swan, was propelled into all our hearts after his hilarious appearance at the renowned UK-based dog show, Crufts. Eagle Swan runs a Facebook, Twitter, and now TikTok page sharing Kratu’s humorous antics, along with more serious information about animal body language and Kratu’s work as her assistance dog.

“I have started to write posts about the necessity to learn basic dog body language so you can recognise fear, stress, uncertainty,” explains Eagle Swan, “I see many dogs - especially rescue dogs - turning their heads or licking their lips: all obvious signs of stress in videos and photos.

“Sadly I have seen more and more animals in fear, nervous and stressed on social media. The worst was a video on TikTok showing a tiny puppy on a bath tap holding on for dear life while the tap was running full force.”

Some argue that animals have no place on social media, but this isn’t a view PETA or Eagle Swan share. “Of course there’s no harm in sharing heart-warming rescue stories or outrageously adorable videos of your or your loved ones' animal companions,” says White.

“It’s extreme to say they don't belong on social media at all,” agrees Eagle Swan, “there are some wonderful stories of some incredible animals that bring great joy to people. Like Kratu for one and many others too. It’s important to see the good that there is and how people can love, and look after animals too.”

Eagle Swan wants to see more positive accounts on places like TikTok, showing animals being truly cared for, instead of exploited for clicks. She says, “lead by example. Show animals being treated kindly, loved and looked after. Show how it should be done. The positive role models should be out there to help educate people using force-free, kind, reward-based training.”