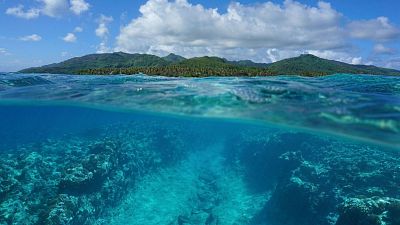 Ocean are crucial stores of blue carbon and the most biodiverse spaces on the planet   -   Copyright  Canva
By Shannon McDonagh  •  Updated: 19/05/2021

The world’s largest biodiversity hub is suffering at the whims of human exploitation.

Coral bleaching, overfishing, and sea trawling are a small sample of the many ways society has failed to protect its oceans. Only 13 per cent of oceans are now home to wildlife, and less than half are protected by any laws.

Land rewilding projects in mountain ranges and forests have become a stronghold in global conservation strategies over the past few years. Rewilding Europe currently has eight successful wildlife maintenance projects spanning from Sweden to Portugal which cover hundreds of thousands of acres.

National Geographic explorer Dr. Enric Sala once told the organisation he was “tired of writing the obituary of the ocean.”

Could rewilding our oceans be the answer?

What is ocean rewilding?

A growing number of conservationists reject the notion that mass tree-planting is a “catch-all” solution to all of our climate problems. On land, rewilding differs from reforestation in the techniques used to assess what elements are best placed, and where.

The ocean premise is similar - reintroducing key plant and animal life into the spaces they are needed, allowing them to grow without human interference.

Ocean rewilding is now considered to be as crucial and effective as land efforts, due to the ocean’s innate capabilities to store “blue carbon” in their seagrass meadows, tidal marshes and mangroves.

It is estimated that the ­­average annual carbon sequestration rate for mangroves averages between two to four times greater than global rates observed in mature tropical forests.

Marine populations are also served better by ocean rewilding schemes that prevent their ecosystems from devastating human interference. This can include protections against damaging activities such as trawling and dredging from marine sediments.

“In a world of change, rewilding is not a luxury but a necessity. Wild oceans enable the planet and people to thrive.”

“We need to put back wildlife in the reverse of the depletion to get the seas rewilded. It’s the highest level of protection that is delivering the biggest impacts for marine and wildlife recovery,” says Callum Roberts, professor of marine conservation at the University of Exeter.

“In a world of change, rewilding is not a luxury but a necessity. Wild oceans enable the planet and people to thrive. To provide resilience and adaptability to changes ahead.”

What is being done about it in Europe?

A network of 68 pan-European organisations are constantly working together to find ways to reinvigorate our continent’s marine life.

One composite is the BioRestore project, a French program conceived in 2012 that restocks wild coastal fish populations using elaborate scientific techniques. They have successfully managed to reintroduce 85 different fish species into three sites across the French Mediterranean - the next step is to lobby for their work to come under legal protection.

You can expect the issue to come up at this host country’s COP26 conference, with Environment Secretary George Eustice confirming this at the Blue Marine Foundation’s “Rewilding the Sea” conference.

He says he wants “biodiversity and the role of nature in addressing climate change to be a major part of that agenda.”

“We also know that when left alone to recover you get an abundance of life in these protected areas. Not only does that have a role in carbon sequestration, but also in biodiversity.”