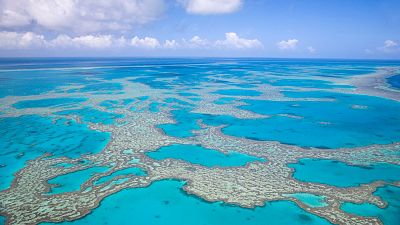 The UN organisation has released its first global scientific assessment of ‘blue carbon’ ecosystems, which double as World Heritage sites. The research shows that preserving these environmental habitats could be “crucial” to fighting climate change due to the amount of carbon stored there.

The three sites mentioned are the Great Barrier Reef in Queensland, Shark Bay and the Ningaloo Coast in Western Australia.

Although the sites make up less than 1 per cent of the planet’s oceans, they house 15 per cent of blue carbon assets in their seagrass meadows, tidal marshes and mangroves.

2 billion tonnes of carbon dioxide are locked away in these marine ecosystems.

The areas are called ‘carbon sinks’, a term used to describe reservoirs of either vegetation or water which store carbon for an indefinite period of time. The Amazon rainforest is one of the largest carbon sinks, absorbing a quarter of the carbon taken up by forests around the world every year.

Carbon sinks help mitigate climate change by sequestering carbon which lowers the concentration of CO2 in the atmosphere.

"Found on the fringes of the world’s coastlines, blue carbon ecosystems play an important ecological role in nutrient and carbon cycling, as nurseries and habitats for a broad range of marine and terrestrial species, in shoreline protection, and in sustaining the livelihoods and well-being of local communities,” said Ernesto Ottone R., UNESCO Assistant Director-General for Culture in a statement.

Why is conserving UNESCO sites so important?

There are hundreds of World Heritage-listed sites all over the world, in almost every country. Some examples you may have heard of are the Vatican City, the Taj Mahal, Yellowstone National Park and Stone Henge.

They are regarded as needing to be safeguarded for future generations, due to their ‘Outstanding Universal Value’, either for education or science purposes or as part of a specific cultural history.

UNESCO World Heritage marine sites are particularly important as they act as the custodians of the largest blue carbon ecosystems in the world. They face challenges to their survival, including pollution, littering and rising sea levels due to climate change.

"Because they store so much carbon, blue carbon ecosystems become sources of CO2 emissions when they are degraded or destroyed. Protection and restoration of these ecosystems present a unique opportunity to mitigate climate change,” says Professor and marine ecologist Carlos Manuel Duarte.

“By conserving blue carbon ecosystems, the large carbon stocks they have accumulated over millennia can be protected. As they are restored, they can regain their function as carbon sinks."

Blue carbon strategies are currently underway in countries all over the world, to conserve seagrass, saltmarsh and mangroves, as well as expanding on seaweed aquaculture.

The UN report suggests that a system of carbon credits could mean countries earn credits for restoration and conservation of damaged areas, thereby incentivising them to better protect their marine ecosystems.

How do you count an ant colony?: London Zoo takes stock of its animals