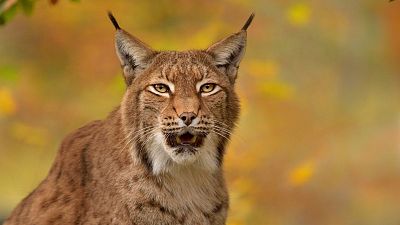 A group of three charities is consulting the public about the reintroduction of the Eurasian Lynx.   -   Copyright  Getty via Canva
By Rosie Frost  •  Updated: 03/02/2021

The Eurasian lynx is thought to have died out in the UK around 500 years ago. They are technically native to the island, but through hunting and habitat loss their numbers declined until eventually they were gone, seemingly forever.

The lynx could soon make a comeback, however, as three Scottish wildlife charities are looking to reintroduce the big cat to parts of the Cairngorms and Argyll.

Lynx are the third largest predators in Europe after the brown bear and the wolf. They are a keystone species which means even small populations of this big cat can have a massive impact on the environment around them. Their ability to keep wild deer under control, so that woodlands can grow, is of particular interest to ecologists in Scotland.

“Scotland has more woodland deer than any other European country, and their relentless browsing often prevents the expansion and healthy regeneration of our natural woodlands,” says Steve Micklewright, chief executive of rewilding charity Trees for Life.

As well as stripping trees bare of their vegetation, deer also remove the shrub layer in forests which provides a habitat for birds such as nightingales and willow warblers.

“By preying on roe deer, lynx would restore ecological processes that have been missing for centuries, and provide a free and efficient deer management service,” Micklewright adds.

Three charities, SCOTLAND: The Big Picture, Trees for Life and Vincent Wildlife Trust launched a study in January to investigate whether people in the Highlands are willing to live alongside the big cats. The project’s partners recognise that the only way for this scheme to succeed is to understand what people think about sharing their natural spaces with these predators.

“Lynx should not be forced upon the people of Scotland,” they say, “but it is also important to have an open discussion acknowledging that, against the backdrop of a global biodiversity crisis, there is an opportunity to bring back not just a charismatic native species, but the missing ecological processes that it would restore.”

Lynx are shy, solitary creatures. Roaming over huge territories, they prefer wooded areas to catch their prey and create dens for their kittens. The species is found over a wide geographical range stretching from France to the Himalayas. Though considered of “least concern” by the IUCN, they have become rare in most regions of Western Europe.

Experts believe that the remote Scottish Highlands could be capable of supporting around 400 of the wild cats. If the consultation proves a success, the country will join a number of other nations working to expand the range and numbers of lynx across Europe.

One country to have its missing lynx restored, however, has a cautionary tale for those looking to do the same. It has a problem that sheds light on the necessity of consulting the Scottish public.

The Jura mountains on the French-Swiss border are thought to be home to around 150 of the big cats. Two thirds of France’s lynx population live in the region after being reintroduced into the 1970s.

But on the 31st December last year, the body of a lynx was discovered in the commune of Quingey. An autopsy report showed that it had been shot and local officials suspect that poachers were to blame. Just one loss is a “serious blow” for the population, but it wasn’t the only lynx shot in the past year.

“In the year 2020, this is indeed the third illegal destruction of lynx confirmed after those which occurred at the beginning of the year in the departments of Haut-Rhin and Jura,” the Regional Directorate for the Environment, Planning and Housing revealed.

Although small in number, conservationists believe that these losses are preventing the population from stabilising and the proportion of these big cats appears to be decreasing in France. Local non-profit, Athénas Center posted an offer of a €1000 reward for anyone with information about the “illegal destruction” on their Facebook page.

The group said that acts like these bring into question their conservation efforts, and the impact on the Jura mountain lynx population would seem to agree.

How are conservation and social science linked?

It’s important to understand why there have been killings of the lynx in France.

Attacks on humans are virtually unheard of, but there is a risk to livestock. Farmers in Scotland have already objected, citing payouts of compensation for more than 20,000 sheep lost to predators in Norway in 2016. Hunters usually object because if the lynx thin out deer populations then there is less for them to hunt.

Rewilding Europe, a group of around 70 different ecological organisations across the continent, is already working towards public acceptance of the lynx. Small, isolated populations of the animal have survived across countries such as Slovenia, Poland, and Germany. But they are incredibly inbred and at risk of disappearing.

Public support for the expansion of their territory and schemes to ensure their genetics are diversified is essential to survival. Life Lynx, a group working in the Dinaric Alps, carries out education and publicity work alongside its practical conservation efforts. The promise of local income from wildlife tourism, celebrity ambassadors and documentaries about the species are all a part of their rewilding arsenal.

It’s this kind of insight that Scotland is hoping to gain from its public consultation; how to build a relationship between human communities and the feline population.

“Reintroducing lynx would inevitably bring challenges,” says Jenny MacPherson, who will lead the study for the Vincent Wildlife Trust.

“Lynx to Scotland will actively include stakeholders representing the full range of perspectives, in order to produce meaningful conclusions about the level of support or tolerance for lynx, and therefore, the likely success of any future reintroduction.”