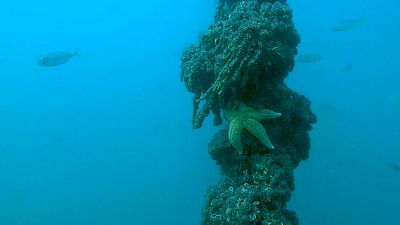 Receivers have been deployed across the seabed to track fish movement   -   Copyright  AP Photo
By Hannah Brown  with AP  •  Updated: 12/05/2021

The University of Plymouth project, launched in March, will monitor marine species, including European bass, pollock, crawfish and bluefin tuna, which are all considered commercially important to the region.

How are the fish tracked?

The project will use underwater acoustic monitoring technology that's based on small tags that emit a unique ping.

Researchers could tag up to 1,000 fish and whenever a fish swims within range of one of the receivers it will log the time and date for each individual.

The receivers will be spread across the English Channel to help map out how these fish species behave and what habitats are important for them over periods of time.

Researchers at the British university are working with organisations in France and Belgium to target seven sites along the coastlines of southern England, northern France, and Belgium.

Why is this important?

Essential marine habitats are being lost and understanding where fish species go could be key to protecting fish populations, say the experts.

"Lots of our fish species are in real trouble, and what we need to do is start looking after the habitats that they use," says Emma Sheehan, Associate Professor of Marine Ecology at the University of Plymouth and the project's principal investigator.

"But at the moment, we just don't know which ones are the most important, and when, and where they are."

The project follows a more localised study which found some fish species remain quite close to home, staying in the same four to five-kilometer region for about 75 per cent of year.

The researchers hope to generate maps and information that will contribute to a growing amount of data on the impact of fishing, climate change, and other human activities on fish populations and habitat.

**Watch the video above to learn more about the project. **