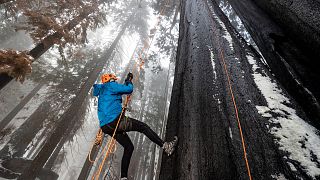 David Milarch is on a mission, to clone the world's oldest and largest trees and preserve them for humanity.

"This tree was 1,000 years old when Jesus walked the Earth," says David Milarch, showing a seedling of a giant sequoia which he cloned from an existing tree.

David set up the Archangel Ancient Tree Archive in 1994. The NGO clones the world's most ancient trees, mostly giant sequoias and redwoods.

"It's like finding a family somewhere in a remote area, where people are 200 to 300 years old. Wouldn't you want to study their genetics and find out how they're able to live for so long?"

The archive studies the genetics of ancient trees, before cloning them and planting them back in their native forests. Their aim is to reforest the Earth with trees that are resistant to global warming.

The world's last remaining sequoias are limited to 75 groves, scattered along a narrow belt of the western Sierra Nevada in California, US. They have massive trunks with bark as thick as 45 cm and can grow over 90 metres tall.

Giant sequoias, having survived thousands of years of wildfires and diseases, are now in danger of being wiped out by increasingly intense wildfires fuelled by climate change.

Large sequoias had never been incinerated before 2015, and the destruction of the majestic trees hit unprecedented levels last year when 10-14% of the 75,000 trees larger than 122 cm in diameter were destroyed.

One famous member of this family, General Sherman, is thought to be the largest tree on Earth by volume. An independent study found that this single tree can store about 86 years’ worth of a person's carbon emissions.

Milarch says that these ancient trees have the capacity to sequester ten times more CO2 than an average tree.

He believes that one way of reversing climate change is to repopulate the planet with these ancient trees.

He believes it is possible to clone 5 million trees in four years, using one tiny piece of a healthy ancient tree. The samples come from the top branches, which are then added to a sterile foam cube, along with a mix of hormones.

To avoid monoculture and promote diversity, the DNA of the strongest and most ancient trees is mixed, which helps these trees to be resistant to diseases.

"So country by country, continent by continent, you want to find the largest, healthiest native species of that country," says Milarch.

By cooperating with laboratories around the world, he thinks it is possible to create hundreds of millions of highly resistant native species.

However, to make a real difference, the world needs billions of these trees.

Watch the video to learn more about these ancient trees.

Cutting down trees is boosting biodiversity in this Finnish forest