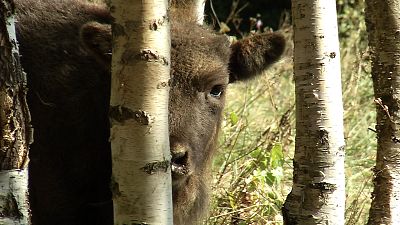 In this episode of Climate Now, as part of Euronews' Green Tomorrow initiative, we report from Romania on the link between biodiversity and climate change, with projects to build bridges for bears and bring back the bison.

But first, the latest data from the Copernicus Climate Change Service.

In September, we had a new high yet again; it was the warmest September on record worldwide, with temperatures more than 0.6 degrees Celsius above the 1981-2010 average.

In the above graphic map of surface air temperature anomalies, everywhere in pink and red was warmer than average last month.

There was a record-breaking warm spell in France, and new record temperatures for September in Turkey, Israel and Jordan.

It was also warmer than average up in the Arctic and in parts of Antarctica.

The above graph showing the monthly surface air temperature anomalies since 1979 demonstrates the clear warming trend in past decades.

Another key climate change indicator we often look at in September is Arctic sea ice concentration. The above graphic shows how the area around the northern coast of Siberia had much less sea ice than average last month.

Overall, sea ice concentration was 40% below average in September, compared to the 1981-2010 reference period.

This month our Climate Now report looks at efforts to preserve and enhance the biodiversity in European ecosystems and make them more robust in the face of a warming planet.

In the Carpathian Mountains in western Romania, one such project has involved building bridges for large carnivores across new roads.

Although primarily built with bears in mind, it's also used by wolves, lynx, deer and wild boar to cross from one habitat to another.

Cristian Remus Papp, Wildlife and Landscape National Manager with the World Wildlife Fund in Romania says the new bridge is aimed at helping preserve ecosystems and making them better at tackling climate change:

"The modern history in terms of developing sustainable infrastructure starts here, because this is really the first ever bridge built in Romania for large carnivores and other animals."

The bridge is 80 metres wide, which Cristian says is necessary for the bears:

"If it's large enough, then the bear will stay in the area for a little while, observe all the movements and so on - and when she considers that it's safe, then she will cross."

The function of the bridges is to avoid the fragmentation of wild areas and allow animals to move more freely, avoiding humans.

Building them is an investment, but it also creates an ecosystem that's more resistant to the effects of climate change.

Another part of the rewilding effort in Romania involves the reintroduction of bison, who were hunted to extinction in the country two centuries ago.

Marina Drugă,Bison Project Manager at World Wildlife Fund Romania, has been working with Rewilding Europe to return these huge herbivores to their natural habitat, and says bringing the animals back actually helps other species:

"There are a lot of studies showing that by bringing bison into the ecosystem, it's actually creating more suitable conditions for other species like wolves, bears or lynx.

"Also, (it helps) a lot of invertebrate species. So basically, bringing back bison, we can increase a lot of our biodiversity in the area."

Biodiversity is gravely threatened by climate change but conversely, a more interconnected and diverse animal population boosted by rewilding efforts can help to limit the effects of global warming.

Cristian Remus Papp believes that, for now at least, humankind can only mitigate against climate change:

"We cannot stop climate change, that's for sure, unless we stop our everyday business, but that's not really likely to happen.

"So what we can do is to build resilience. If we are helping the ecosystems to be healthy enough and mature enough in order to at least reduce the impact of climate change, then all the better for us."