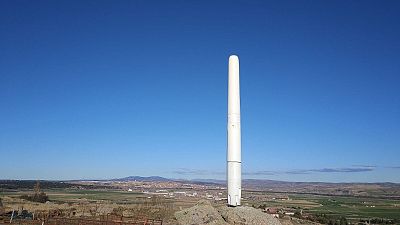 They are widely criticised for being ugly, noisy and harming wildlife. However, the majority of these problems come down to the traditional windmill design that is dating back to the ninth century.

What is the Aeromine bladeless wind turbine?

You won't see these turbines in fields because they're fixed to the side of a building that gets the strongest wind - though they can create energy from wind as slow as five miles an hour. They're installed in rows of 20-40 units and connected directly to the building's electrics.

Since they're so small, they take up far less room than traditional turbines and have the added advantage of being silent.

If combined with another energy source, such as solar, Aeromine's turbines could power a building entirely from renewables.

How does the Vortex bladless wind turbine work?

While different sizes are under development, Jorge Piñero from Vortex Bladeless tells Euronews Green that bigger is better. "Power grows exponentially with the size of the device. A Vortex Tacoma of 2.75m high could be powering a fridge, many phones and some led lights for an off-grid house."

As no blades are needed, the turbine is relatively low maintenance and quiet.

Plus, the design means no harm to birds - an important feature when you consider that hundreds of thousands are estimated to die each year after crashing into wind turbines. Although this figure is still lower than the number of birds killed by fossil fuel stations.

Watch the video above to see the 'skybrator' in action.