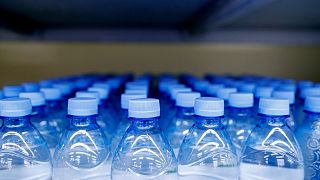 Plastic equivalent to the weight of almost 90 Eiffel Towers is being sold by British supermarkets.

This represents a plastic footprint which has grown significantly since 2017, according to a new report by two environmental charities.

In its third annual Checking Out On Plastics report, Greenpeace UK and the Environmental Investigation Agency found that the 10 leading supermarkets collectively put almost 900,000 tonnes of plastic packaging through the tills in 2019.

It also found that 2.5 billion plastic water bottles were sold or given away.

While 2019 saw a dip of 1.6 per cent in plastic waste from the previous year, overall waste levels increased by 1.2 per cent from 2017’s figure.

“We had hoped to see a much sharper downwards trajectory as strategies and targets bear fruit. Instead, we are looking at a relatively static picture – the sector urgently needs to pick up the pace,” says EIA Senior Ocean Campaigner Christina Dixon.

The survey which is based entirely on data supplied by the supermarkets themselves, also reported that 1.58 billion plastic “bags for life” (which contain more plastic than thinner single-use bags) were issued across the top brands, dwarfing the number of single-use carrier bags.

Supermarkets have been talking big on plastic… but the proof’s in the pudding.

The research found most supermarkets managed to reduce plastic packaging on their own-brand products but were being undermined by lack of action from brands they stocked.

Dixon adds, "we’d like to see supermarkets increasingly taking the fight to the big manufacturers and compelling them, in turn, to drive down their own plastic footprints.”

Turning off the plastic tap

In response to the findings from the UK, anti-plastic campaign group, A Plastic Planet is calling for action from the European Commission.

Co-founder, Sian Sutherland, said, "Next month is the 3 year anniversary of the launch of the world's first Plastic Free Aisle in Amsterdam."

"And yet, here we are, 3 years later with the proof that supermarkets are still giving us far too many plastic pledges and far too little real change that actually tackles the crisis.

"The EU Green Deal aims to tackle the world's most pressing environmental challenges but will fail drastically if we cannot get plastic pollution under control. We call today for the European Commission to set plastic reduction targets and for mandatory plastic footprint transparency throughout all supermarkets and industry. Now more than ever, we need to turn off the plastic tap."

What are European Supermarkets doing about plastic?

Dutch supermarket chain Ekoplaza has more than 1400 plastic-free organic products in their stores, following the success of pop-up aisles. The plastic-free products are recognised by the PLASTICFREE quality mark.

The French supermarket, Carrefour is also ahead of its plan to reduce the use of packaging, exceeding its targets on the CSR and Food Transition index, with an overall achievement rate of 114 per cent in 2019.

But as highlighted in the report, their efforts are being undermined by lack of action from brands they stock. So what are some of the big names proposing to do?

Swiss multinational, Nestle, is the world's largest food and beverage company. They have pledged to make 100 per cent of their packaging recyclable or reusable by 2025.

British multinational consumer goods company, Unilever, say that by 2025, 100 per cent of their plastic packaging will be designed to be fully reusable, recyclable or compostable.

What is the EU doing about plastic?

A European ban on certain single-use plastics comes into effect on July 3, 2021.

The products banned will be:

Biodegradable plastic may not degrade as quickly as expected